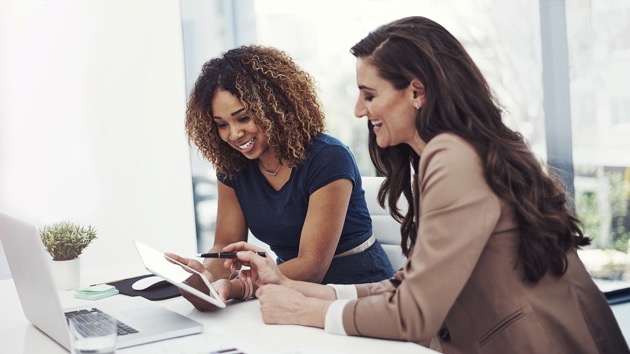 Tinpixels/iStock(NEW YORK) — Women who want to excel at their jobs and break the glass ceiling have to go one step further than men when it comes to networking, a new study found.
Women who form a tight-knit inner circle of other women who can share career advice and experiences are nearly three times more likely to get a better job than women who don’t have other women to rely on, according to the newly-released study that followed graduates of a top-ranked MBA program.
"A lot of my female MBA students believe that what men are doing will work for them," said Brian Uzzi, a professor at the Kellogg School of Management at Northwestern University and an author of the study. "But women who emulate men’s networks do the worst."
Uzzi’s research found that women still need the same network as men — one that is diverse and exposes them to different sources of information — in addition to an inner circle of two to four women. And, yes, it needs to be women.
"When you talk to women about their job interviews and the things that concern them, it’s about how the culture of the firm is oriented towards women," he said. "That type of information is most helpful if it comes from another woman."
"And this is the kind of information that helps women break through the glass ceiling," Uzzi explained.
The finding that women have to go a step further than men when networking seems at first glance like a burden, another example of women having to do more for the same result.
J. Kelly Hoey, the author of "Build Your Dream Network," sees it as actually a major win for women.
"These women are getting it," she said of the women in the study, who ranged in age from 25 to 33. "Millennial women don't view the world with the same sense of scarcity [as older generations], where if you get a promotion as a woman, I don't get a promotion."
"They get that they need to share information, and they’re not threatened by sharing information with their peers," Hoey said. "Women are figuring out the game."
Kirsten Green, a founding partner of Forerunner Ventures, is seeing that shifting mentality unfold firsthand in her career. She helped launch All Raise, a non-profit that promotes women in tech and was founded after a small circle of female investors began meeting for dinners.
"There is this really exciting moment right now where there are a lot of women in the workforce and we are embracing more opportunity for ourselves and more equality," she said. "[Women] are natural collaborators and communicators and we innately see the value in having a support group to run ideas by and, better yet, to support each other."

How to build your own inner circle
Networking can feel like a time-consuming job in itself, but it does matter, especially for women, according to Uzzi.
"Your network is your strongest vehicle to getting the job you want in life,," he said. "What’s going to differentiate you from others is having a network that provides you with information to better negotiate."

Here are five tips for women on creating a powerful inner circle network.

1. Do an audit of your network: Ask yourself if you have the right mix of people in your network to help you get where you’re going, if you have an inner circle and if they have the insights and experience to help you, recommends Hoey.
2. Look in unlikely places: A strong network is a diverse network, so look outside your comfort zone for other women to connect with. "It's the random contact that’s likely to bring you the most diverse information," said Uzzi.
3. Carve out time to connect in smart ways: Green takes what she calls a "one plus one equals three approach" to building deeper relationships with women in her network.
"Maybe I don't have time to work out and I don't have time to see a friend, but what if I took a friend on a walk and we got two things accomplished," she said. "It's being intentional about carving out time for it and doing it in a way that feels good to you so it's not a burden."
4. Be open to change: If you don't have the support you need, find changes you can make in your life to meet the women you want in your inner circle. Hoey recommends volunteering, joining a career-oriented committee and taking on new roles as ways to expand your contacts.
5. Keep your inner circle diverse: The women in your inner circle should be connected to you but not to each other so they each have different contacts and experiences they can bring to you, according to Uzzi.
Copyright © 2019, ABC Radio. All rights reserved.