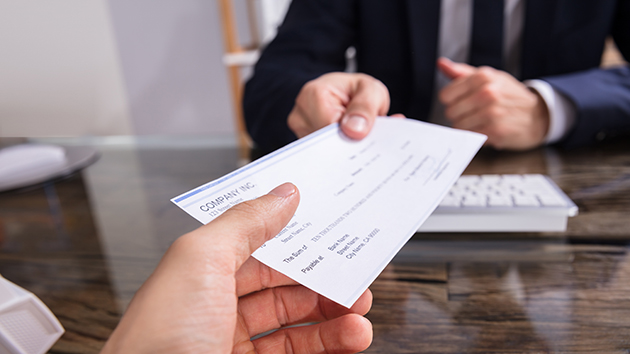 AndreyPopov/iStock(WASHINGTON) — Federal workers wondering when their next paycheck will arrive after a historic 35-day shutdown are being told one answer: It depends, but probably very soon.
President Donald Trump said Friday he will sign legislation to reopen the government for three weeks, until Feb. 15.
It was welcome news after five weeks in which 800,000 federal employees were either furloughed or told to report to work without pay. Many airline security workers called in sick, and some 14,000 IRS employees recalled to work to start processing tax filings didn't show this week, significantly ratcheting up pressure on Trump and congressional Democrats to resolve their dispute over money for a border wall.
Federal workers were on track to miss their second paycheck on Friday or early next week, depending upon their agencies' pay cycle.
"I will make sure that all employees receive their back pay very quickly, or as soon as possible," Trump said. "It'll happen fast."
Congress has already passed, and Trump has signed legislation guaranteeing back pay for all affected federal workers. Contractors who are paid by private companies to work for the government are not promised back pay because they aren't federal employees.
One union president had only one message for the president.
"Get the checks out now," said Tony Reardon, head of the National Treasury Employees Union. "Federal employees haven’t been paid in more than a month and mortgage and rent are due next week. They shouldn’t have to wait a minute longer.”
A senior administration official, speaking on condition of anonymity, told reporters Friday that steps were being taken to ensure employees received the pay as soon as possible. But, the official noted, the precise timing of the next paychecks will likely vary somewhat.
"Since specific payroll issues vary by agency, employees can find more information about paycheck details by reaching out to their agency," the official said.
The Office of Management and Budget said it would issue a memo officially reopening the shuttered departments after Trump signs legislation to end the spending lapse. He was expected to do that as early as Friday.
After that, the agencies will reach out to employees and contractors on "restarting activities and addressing other impacts of the lapse."
Copyright © 2019, ABC Radio. All rights reserved.