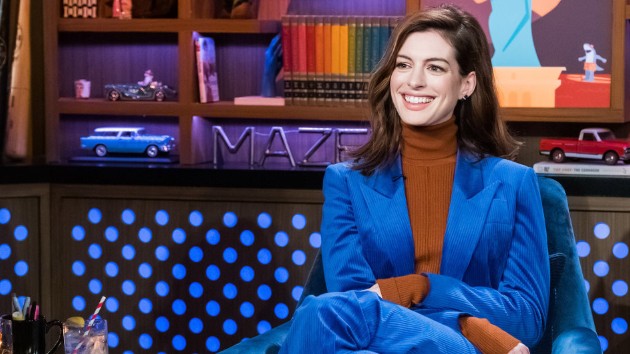 Charles Sykes/Bravo(NEW YORK) — Sure, Anne Hathaway has an Oscar…but she hasn't forgotten which movie gave her her big break back in the day.

"There is a script for the third movie," she said in response to a call-in question.

"I want to do it," she added of what would be the threequel to the hit 2001 original that launched her career.

In The Princess Diaries, Hathaway played a slightly geeky average teen who finds out she's the heir to the throne of a fictional European country. She learns the royal ropes from the current queen — her estranged grandmother — played by screen legend Julie Andrews.

"Julie wants to do it. Debra Martin Chase, our producer, wants to do it," said Hathaway. "We all really want it to happen…It's just we don't want to do it unless it's perfect, because we love just as much as you guys love it…But we're working on it!"

The late Garry Marshall directed both the original movie and its 2004 sequel The Princess Diaries 2: Royal Engagement. The filmmaker passed away in 2016.