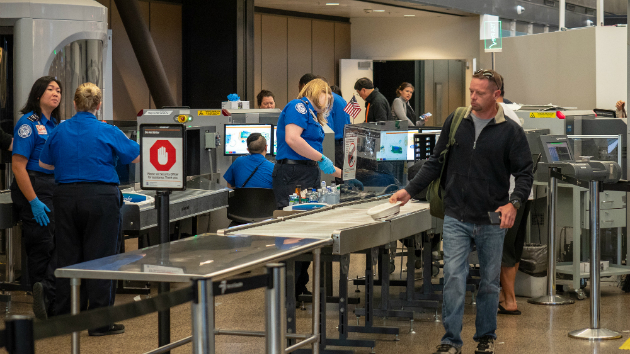 David Tran/iStock(NEW YORK) — Mia Williams was overcome with emotion when she had to tell her 7-year-old son she might not be able to afford to buy pizza for dinner amid the longest government shutdown in U.S. history and missing paychecks as a result.
"It did everything to me to look at my baby and tell him, 'Well let's see, because right now momma can't afford it,'" she told ABC News in an interview Tuesday.
Williams is a single mom of two boys and has been a Memphis-based Transportation Security Administration agent for over a decade. As the longest government shutdown in history enters its fifth week, she is struggling to put food on the table and on Friday, she will miss a second paycheck.
She is still going to work everyday — unpaid.
"It affects me as far as going to work, performing my duties," she said.
The impacts of the partial government shutdown — which appears to have no end in sight due to a stalemate between the White House and Congress — are stretching into every aspect of her daily routine, including suddenly cutting back on food and gas money.
Despite the fear, Williams said that a few phone calls helped relieve the worry about upcoming bills. Her credit card company has postponed her next payment and her utility company delayed the bill until March.
But, as a single parent homeowner, the shutdown is taking a toll on her family.
"Who do you turn to when people are turning to you because you’re the rock?" Williams said. "Who do I turn to for my strength because I’ve got to be strong?"
Turning to a second job has become a reality for many, like Jana Frierson, a friend and a colleague of Williams. Frierson has worked as a TSA agent, a union representative for The American Federation of Government Employees, for 10 years.
Although she has picked up a second job at Dollar Tree, making $7.36 per hour, she is struggling to take on shifts since her primary job demands a 40-hour work week and could return at any point.
Frierson said she fears the worst: She won't be able to afford February rent, gas and medicines.
"I'm so afraid that I'll be evicted," she said.
She added that her deadline to pay her rent in a couple of weeks will only pile on more late fees and a maxed-out credit card.
For Frierson, the shutdown has affected her psychologically and physically. She had to call out sick in December and returned to work this Tuesday.
"I'm panicking and so insecure about my financial situation and being able to provide for myself and my children," she said.
Speaking for more than just herself, Frierson expressed, "We're scared. We have families."
Both women are more concerned with making ends meet than the political fight in Washington. But both said they wanted the government to reopen and to "quit playing with our money."
"Just pay us and then figure it out," Williams said. "Pay us and y’all figure it out."
Frierson said she still has hope that this shutdown will get better, urging a quick resolution since she said she just wants to be compensated for the work she does.
"I absolutely love what I do there," she said. "Quitting my job right now I cannot even fathom that at this point because I put so much into my job. I’ve invested so much into what I do."
Copyright © 2019, ABC Radio. All rights reserved.