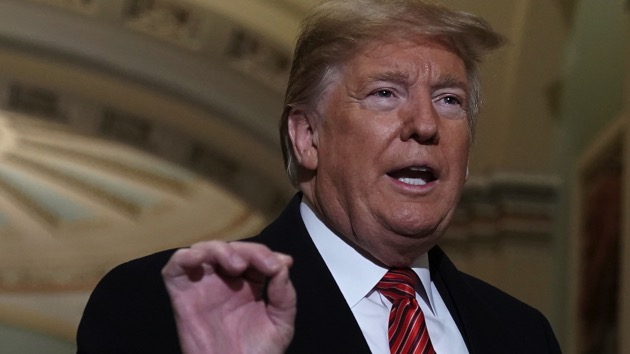 Alex Wong/Getty Images(WASHINGTON) — President Donald Trump is expected to make an announcement regarding the government shutdown this afternoon from the White House, Press Secretary Sarah Sanders announced Friday.
Congress has been trying to come to a deal to reopen the government, ending the longest shutdown in U.S. history.
Sources familiar with the latest say the conversations have been fluid, and that a deal is not necessarily locked in.
After Democrats rejected a proposal to temporarily reopen government with a pro-rated amount of border wall funding Thursday evening, Sen. Lindsey Graham told reporters Friday morning that Republican senators were looking to the White House to decide the next move.
Bipartisan talks about a possible short-term compromise — a three-week stopgap funding bill to reopen the government — began late Thursday between Senate Majority Leader Mitch McConnell and Minority Leader Chuck Schumer.
A Senate Republican leadership aide says the GOP is "very wary" of President Trump, pointing out McConnell has been stung by Trump before. The aide is adamant that the president won't announce a “McConnell deal” – this is a “President-Democrats deal.”
Aides to House Speaker Nancy Pelosi and Schumer did not immediately react in anticipation of the president's announcement.