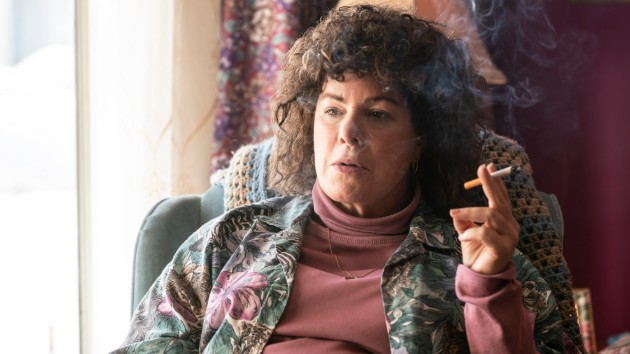 Photo by Courtesy of Lifetime Copyright 2019(NEW YORK) — This Saturday, Oscar-winner Marcia Gay Harden stars in Lifetime's Love You To Death, a movie based on the HBO docuseries Mommy Dead and Dearest. The docuseries examined the real-life 2015 murder of Dee Dee Blanchard by her daughter, Gypsy Rose.

The murder drew attention because Blanchard had Munchausen syndrome by proxy, forcing Gypsy Rose to pass herself off as younger, disabled and chronically ill in order to gain sympathy and attention. She'd also subjected Gypsy to unnecessary surgery and medication.

While a story like this doesn't seem universal, Harden laughs, "Every teenager wants to murder their parent, first of all!"

She adds, "Second of all, many parents, certainly me, would fall on the side of being overly protective. So that I could relate to, about the mom."

Relatable or not, Harden acknowledges that Munchausen by proxy isn't actually something you'd expect to encounter in the real world, since it's been used as a plot twist in TV shows and movies like Sharp Objects, The Sixth Sense and True Detective.

Love You to Death premieres Saturday at 8 p.m. ET.

‘Raya and the Last Dragon’ star Kelly Marie Tran muses on scoring the Disney pop-culture Triple Crown
Golden Globe winner Andra Day shares significance of winning awards as a new actress
Judge returns to bench after son’s murder: ‘I will not be frightened or be afraid to do what I love to do’
No big gatherings for Saint Patrick’s Day in Boston: ‘We are so close to a finish line’
Court mulling whether to reinstate 3rd-degree murder charge against Derek Chauvin in George Floyd’s death
Black business owners must overcome obstacles to have a chance at building wealth