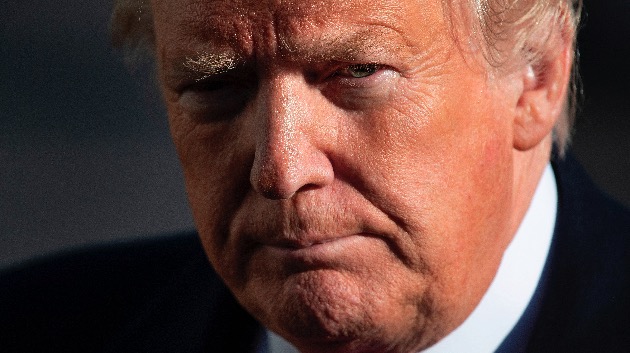 JIM WATSON/AFP/Getty Images(NEW YORK) — Blame for the partial government shutdown continues to focus on President Donald Trump and his party in Congress, with the president’s overall job approval rating the lowest on record for any president after two years in office. But there’s criticism aplenty across the aisle as well.
Fifty-three percent in a new ABC News/Washington Post poll blame Trump and Congressional Republicans for the shutdown, same as two weeks ago, and 60 percent disapprove of how Trump is handling efforts to end it. House Speaker Nancy Pelosi and her Democrats get less of the blame (34 percent) but 54 percent of Americans also disapprove of their work on the issue.

See PDF for full results, charts and tables.
Trump’s job approval rating is 37 percent in this poll, produced for ABC by Langer Research Associates; that’s down four percentage points from October and a point from his career low. He’s got the lowest two-year average approval rating on record for a president in polls back 72 years (38 percent) compared with an average of 61 percent for the 12 previous presidents since 1945.
Among groups, Trump’s dropped to a new low of 27 percent approval among women, down 9 points since November, led by a 13-point drop among college-educated white women; his rating is a broad 22 points higher among men: 49 percent. And at 32 percent approval, his rating among political independents, often the swing group in U.S. politics, matches its low.

Shutdown and Immigration
Twenty-two percent of Americans now say they’ve been inconvenienced by the partial shutdown, tying the level reached in the shorter shutdown in 2013 and nearly double what it was in 1995-96. Ten percent report a major inconvenience.
Among those inconvenienced, Trump’s job approval rating drops to 23 percent, with 75 percent disapproving – 67 percent strongly so. That’s largely because Democrats and Democratic-leaning independents are more than twice as apt as Republicans and GOP leaners to report being inconvenienced by the shutdown, 29 vs. 13 percent.
On the issue at the heart of the partial shutdown, 54 percent say the United States is doing too little to keep undocumented immigrants out of the country, a score on Trump’s side; but fewer, 42 percent, support his insistence on a border wall, with 54 percent opposed. (That said, support for a wall remains up from its pre-shutdown level.)
The public, moreover, divides closely in trust to deal with the issue. Framed as “border security,” 40 percent trust Trump and the Republicans in Congress more to handle it, while 42 percent trust Pelosi and the Democrats more. Framed “illegal immigration,” it’s 42-47 percent.
That result for the GOP on handling border security is worse than in a Nov. 1 ABC/Post poll, when just the parties were tested (without mention of Trump and Pelosi); in that measure the Republicans had a 10-point advantage on border security.

Intensity
The intensity of sentiment about Trump, chiefly negative, is notable. All told, 28 percent of Americans strongly approve of his work in office, while many more, 49 percent, strongly disapprove. Strong disapproval reaches 59 percent among women (vs. 38 percent among men). It’s as high, 59 percent, in the West, and also reaches majorities of college-educated Americans (57 percent) and urban residents (56 percent).
Strong anti-Trump sentiment peaks among blacks, at 85 percent, and Democrats and liberals, both 82 percent. Strong pro-Trump views, for their part, are highest among strong conservatives (71 percent strongly approve of his work), Republicans (69 percent) and evangelical white Protestants (62 percent).
Trump incites strong views, as the table shows; most of his supporters are strongly with him, and most of his opponents are strongly critical.
Also notable is the extent to which gender-based views cross party and other lines. Trump’s approval rating is 19 points lower among Democratic women than Democratic men (5 vs. 24 percent), 16 points lower among independent women vs. independent men (23 vs. 39 percent) and a slight 12 points lower among Republican women vs. Republican men, 72 vs. 84 percent.
There’s a similar pattern in terms of urbanicity. Trump is 17 points less popular with urban women vs. urban men, 23 vs. 40 percent, and 25 points less popular with suburban women than with suburban men, 25 vs. 50 percent. While the sample sizes are small, the gender gap in rural areas looks at least as large.
Results on the shutdown and immigration policy largely follow partisan and ideological lines — albeit with more blame on Trump and the Republicans — rather than Pelosi and the Democrats, in most demographic groups.

Methodology
This ABC News/Washington Post poll was conducted by landline and cellular telephone Jan. 21-24, 2019, in English and Spanish, among a random national sample of 1,001 adults. Results have a margin of sampling error of 3.5 points, including the design effect. Partisan divisions are 32-24-37 percent, Democrats-Republicans-independents.
The survey was produced for ABC News by Langer Research Associates of New York, New York, with sampling and data collection by Abt Associates of Rockville, Maryland. See details on the survey’s methodology here.