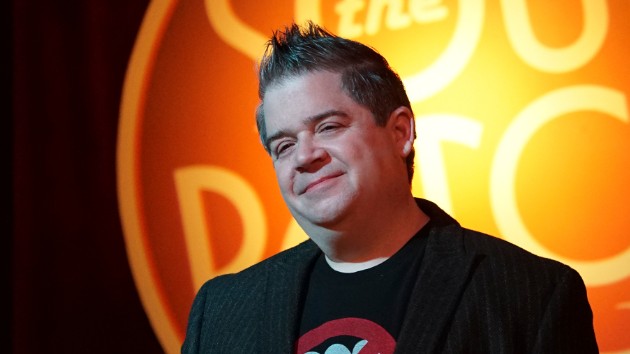 ABC/Eric McCandless(ALABAMA) — Actor and comedian Patton Oswalt has taken the concept of "when they go low, we go high" to a new level.
After he was criticized on Twitter for his political affiliation by Michael Beatty — a man he doesn't know — the funnyman took at look at Beatty's social media profile and got serious.
"Aw, man. This dude just attacked me on Twitter and I joked back but then I looked at his timeline and he’s in a LOT of trouble health-wise," Patton posted. "I’d be p***** off too. He’s been dealt some s***** cards – let’s deal him some good ones. Click and donate – just like I’m about to."
Oswalt shared a link to the man's GoFundMe page, where Beatty, a 64-year-old from Huntsville, Alabama, explained that after "two weeks in hospital with sepsis" and after he "coded twice," and almost dying, he had a mountain of medical bills to pay. Oswalt also chipped in $2,000 of his own money to the cause.

Oswalt's tweet really helped: Nearly $32,000 was raised, far exceeding Beatty's goal of $5,000.
On Thursday, Beatty replied to Oswalt and told the man he once criticized that he's now a loyal fan — of more than just the actor's work.
"Patton. You have humbled me to the point where I can barely compose my words," he wrote. "You have caused me to take pause and reflect on how harmful words from my mouth could result in such an outpouring. Thank you for this and I will pass this on to my cousin who needs help. A cascade."
Oswalt responded, "Whew! Is your cousin the one who had sepsis or was it you? Either way I’m glad the $$$ goal was met."

'Black Panther' or 'BlacKkKlansman'? 'The Americans' or 'The Handmaid's Tale'? Stars of TV and movies gear up for this Sunday's Screen Actors Guild Awards (DRAFT) Comments Off Share Article modify remove organize post follow up

Will & Grace's Megan Mullally is hosting the awards show, which boasts a who's who of presenters, from Black Panther stars Angela Bassett and Chadwick Boseman to Lady Gaga and her A Star Is Born director and co-star Bradley Cooper.

Here are the nominees in major categories: