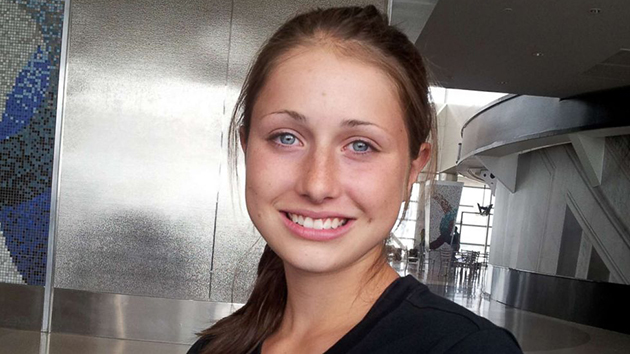 Speaking out for the first time in a television interview, McCluskey's still-grieving parents Matt and Jill McClusky said they believe their daughter's death was preventable, and that the university failed to protect her.
Matt McCluskey told ABC News' Amy Robach that, to him, the greatest tragedy surrounding his daughter's death "was the unfairness of it."
"We won't get to see her at each stage of her life and she was so excited about, having a career … having a family in the future," Jill McCluskey added.
"We won't get to see any of that or experience any of that," she said.

In October of 2018, the track star broke up with Rowland, 37, after discovering that he had lied about his age and identity. He also failed to tell her that he was a registered sex offender on parole. Following the split, Lauren McCluskey was inundated with a barrage of harassment from Rowland.
She first contacted University of Utah campus police on Oct. 12, and then — a week later, on Oct. 19 — she contacted Salt Lake City Police.

In haunting recordings of her call to the city police, the dispatcher says they are going to transfer her to the university police.
"I've talked to them already," she can be heard saying. "I just wanted to call you as well."
Over the next ten days, she put dozens more calls into the police departments.
"Hi, I've been blackmailed for, for money," she is heard saying in one recording.
"I'm worried because I've been working with the campus police at the 'U' and last Saturday I reported and I haven't gotten an update," she said in another call.
In another recording, she can be heard pleading.
"They haven't updated or done anything. So the case, it involves extortion and those people are still reaching out to me."
Jill McCluskey said that her daughter had called her before her death and said that she felt like she was "bothering" police with all of her calls for help.
"She said, 'It feels like I'm bothering them,' because she called … she was calling so much," she said. "I remember telling her, 'It's their job to listen to you.'"
But they weren't listening, the mom said.
"They weren't taking her seriously."
"I have the phone records," she explained. "For one officer, there were 22 calls back and forth and none of them are recorded, because it's on the cell phone."

On the evening of Oct. 22, 2018, while walking to her dorm and talking to her mother on the phone, her parents' worst nightmare unfolded.
"I was on the phone with her as … she was coming home from class," Jill McCluskey recalled. "And then all of a sudden, she yells, 'No, no, no!'"
"And then the line was still open," she said. "And then Matt called 9-1-1. I … I yelled to him and he called 9-1-1."
In the 911 call, Matt McCluskey can be heard telling the dispatcher that his daughter "was abducted while we were talking on the telephone. So we heard her being assaulted."
In that moment, while still on the phone with her mother, Lauren McCluskey was grabbed by Rowland, pulled into her own car and then shot to death, according to authorities.
Her parents said they believe the University of Utah failed to protect their daughter.
"They seemed to show no curiosity about his person who had lied about his age, his name, his … he was a sex offender," Matt McCluskey said. "And then they found out that he's also a felon."
"They should've investigated," the father added. "They would've very quickly found his parole status in one call and it would … we wouldn't be sitting here today."
Shortly after her death, the University of Utah released an independent review of the case.
"The university president said that there was nothing that they … that could've been done … to prevent Lauren's death," Jill McCluskey said. "I just had a sick stomach for days after that."
For Matt McCluskey, what stood out most about the report was the "sheer number of findings that showed missed opportunities" and "individual and systemic failings."
"The volume of it was — surprising," he added. "You could throw out half of those findings and you'd still be left with a pretty powerful report."
"I probably wouldn't have believed it if it were in a movie," the father said.
The University of Utah told ABC News in a statement that the university community grieves the loss and that their report "identified areas of deficiency in the university’s systems and processes and made 30 recommendations for ways to improve them. The university is acting immediately to correct the deficiencies identified in the report."
"Work is underway to implement every one of the 30 recommendations made by the review team," the statement added.
Among other changes, they are now requiring increased training for their officers, hiring more detectives as well as a victim advocate who will work closely together, and implementing new procedures to improve communication and responsiveness.
The university's full response can be read here.

The McCluskey's are now starting a foundation in honor of their daughter that aims to protect other young women on college campuses.
"The Lauren McCluskey Foundation," Matt McCluskey said, "It's going to focus on three areas: One is campus safety and that's, of course, based on her death … research and education into ways to protect our daughters."

"The second area is … celebrating her life," he said, noting that it will support youth and college track and field athletes.
"And the third is reflecting her love of animals and so that's to support — animal shelters," he said.
Jill McCluskey said that they hope to "do something good and make a difference, maybe change some laws," in the wake of their daughter's death.
"If we can make a difference going forward," she said. "It will at least take our minds off the sadness."
Copyright © 2019, ABC Radio. All rights reserved.