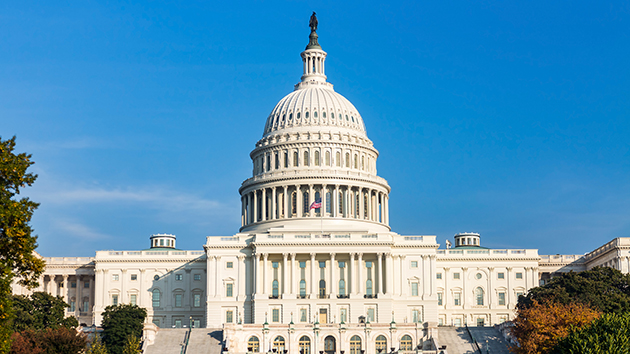 Tanarch/iStock(NEW YORK) — When President Donald Trump made his surprise announcement Friday that a temporary deal had been reached to reopen the federal government, federal workers across the nation breathed a massive sigh of relief.
Emotions were high as people at the food pantry at the Coast Guard Academy in New London, CT reacted to his announcement.
Christy Rose, the administrative assistant to the commandant of cadets/USCG who had been working at the pantry since the shutdown watched the speech live from her phone as others gathered around her.
She held back tears when she heard the news and repeated, “we get to go back to work.”
“I’m really happy,” she said. “It’s been hard. It’s hard when you’re told you have to stay home when you really want to be at work.”
Marj Adler, who dropped off food and brought a therapy dog for people at the pantry was also pleased at the President’s remarks. “He just needed to say what he needed to say to let people know that they’re going back to work and he’s in support of that, that’s what we needed to hear.”
She also expressed hopes for bipartisanship.
“I hope that the houses of our government work together to come up with something so that if again President Trump vetoes it, they can overrun it and protect the people.”
Others didn’t seem as worried about the outcome. Joy Tanner, who was in full support of the President said she “had no doubt or no reservations about what was going to happen,” no matter how long it took.
“There’s nothing wrong with hardship as long as the end result is better than before,” she said.

Regardless of political beliefs, the overall sentiment was relief that federal workers would be able to return to work.
“I get to go back to work on Monday!” Rose said. “I can’t wait.”
Copyright © 2019, ABC Radio. All rights reserved.