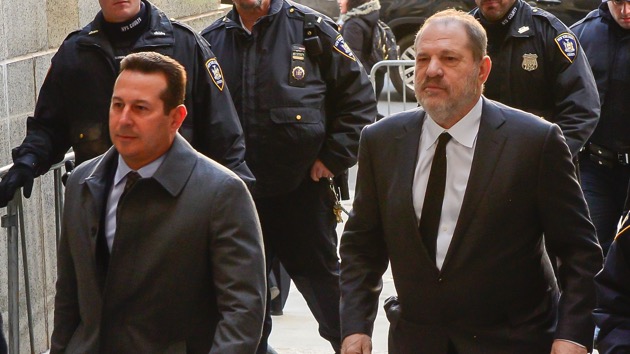 Raymond Hall/GC Images(NEW YORK) — The Harvey Weinstein legal drama is entering a new chapter as the disgraced movie mogul is now working with a new lawyer.
Weinstein, who has repeatedly denied wrongdoing in the face of his sexual assault and misconduct allegations, will be represented by attorney Jose Baez going forward.
Baez is best known for having represented Casey Anthony, whose murder trial gained national attention before she was acquitted.
The New York State Supreme Court judge overseeing Weinstein's case, where he faces five felony sex crimes including rape, approved the withdrawal of Benjamin Brafman as Weinstein's attorney on Friday.
"I wish him the best of luck with his case," Brafman said outside of court.
Baez also represented actress Rose McGowan in a cocaine possession case that had ties to Weinstein. But the judge in Weinstein's case said that Baez cannot use any information obtained in the course of representing the actress, who has accused Weinstein of sexual misconduct.
"We owe her a duty of confidentiality," Baez said of McGowan.
Asked why he decided to take on Weinstein’s defense, Baez said, "This case is testing the presumption of innocence in our country … he should be entitled to the same presumption as everyone else."
Baez said Weinstein "is innocent."
Copyright © 2019, ABC Radio. All rights reserved.