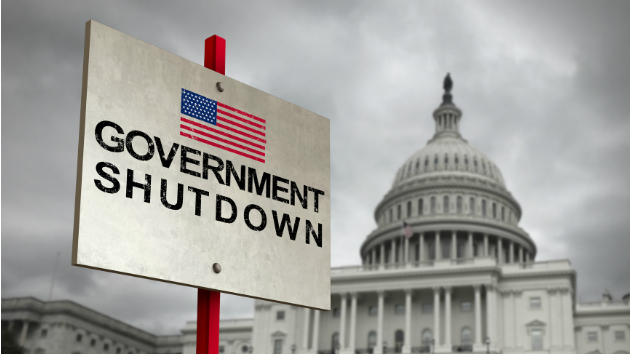 wildpixel/iStock(WASHINGTON) — The lead transportation security officer at Baltimore's biggest airport is having a hard time explaining to his 10-year-old daughter why he had to pull her out of her cheerleading program: He hasn't been able to get a paycheck for 35 days because of a government shutdown over border wall funding — and he doesn't know when the next paycheck will come.
"I'm still a great dad regardless of whatever but its hard for me to explain this to her," said Lamar Cobb, who has been a Transportation Security Administration officer for 11 years at Baltimore/Washington International Thurgood Marshall Airport and will soon be one of 800,000 federal officers to miss a second paycheck because of the longest-ever government shutdown.
"Nobody is saying hold on. Nobody is saying hold on. Everybody thinks it's going to last until March, April — and they're weighing their options," said Cobb.
The second round of missed paychecks hit some federal workers Friday amid bipartisan talks about a possible short-term compromise.
Late Thursday, Senate Majority Leader Mitch McConnell and Minority Leader Chuck Schumer were trying to negotiate a three-week stopgap funding bill to reopen the government.
Paychecks will continue to be missed for federal employees across a host of different agencies in a ripple effect, including the Department of Interior and the Department of Treasury in the days after, according to the pay calendar kept by the Navy Federal Credit Union, one bank that services federal workers.
Members of the Coast Guard will miss their second paycheck on Wednesday, Jan. 30.
Early Thursday, Commerce Secretary Wilbur Ross came under fire for making comments that downplayed the hardship federal employees were facing. Later in the day, Ross acknowledged some of those difficulties.
“You're talking about 800,000 workers,” the secretary initially said. “And while I feel sorry for the individuals that have hardship cases, 800,000 workers if they never got their pay — which is not the case, they will eventually get it, but if they never got it, you're talking about a third of a percent on our GDP [Gross Domestic Product] so it's not like it's a gigantic number overall.”
Cobb, who said he works with many employees who are single mothers, are fresh out of school and have debt, or are currently putting themselves through school, explained why he doesn't find comfort in just knowing a paycheck will eventually come.
"People feel like, 'I have no idea when it's going to end,'" he said. "We are family the officers so when things like this happen we all feel helpless, people coming in crying because they don't know how to pay — it's just so tragic."
"If this goes on for months you have people that will be homeless," Cobb added.
A 2018 study from Northwestern Mutual found that 21 percent of adults have nothing saved for retirement, and another 10 percent have less than $5,000 saved.
Car payments, childcare, mortgage payments — they all can drain savings quickly when there's no replenishment, Cobb said.
"It's hard for people. It's hard for people to come to work — the morale goes down, the work ethic goes down because you're stressed out," he said.