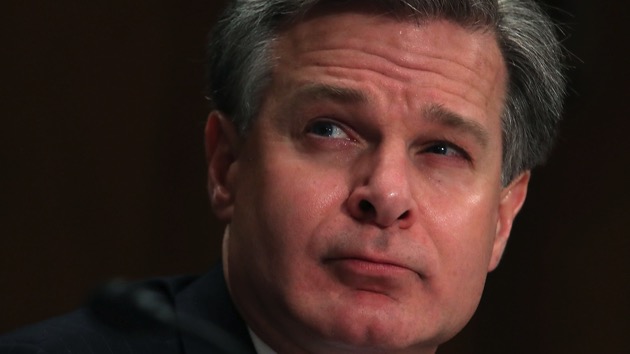 Mark Wilson/Getty Images(WASHINGTON) — In an angry video message sent to employees on Friday, FBI Director Chris Wray had a simple message: The government shutdown, now in Day 35, is "unfair" and he knows agents are hurting.
“Making some people stay home when they don’t want to, and making others show up without pay–it’s mind-boggling, it’s short-sighted, and it’s unfair,” he said.
“It takes a lot to get me angry, but I’m about as angry as I’ve been in a long, long time. Sure, I get it. You’re public servants, and I know I can count on you to keep doing everything you can to help others, however you can," Wray said.
"But you’re also people with bills to pay. You’re also moms and dads. You’ve also got rent payments and mortgages, and utilities and car payments and gas and groceries to buy. And you can’t put those worries aside just because you serve the public,“ he said.
Wray avoided taking political sides but wanted to make clear that even as they keep serving their country, FBI employees still have to worry about paying the bills. "In this polarized environment, even seemingly straightforward statements can be hijacked by one side or the other," he said.
Top FBI officials had tried to "think outside the box" to find a way to pay employees, he said, but the effort fell short.
Wray told employees he and other bureau official weren't going to the news media to advocate for them — but were doing that "at every level."

"I’m seeing that here at Headquarters, and I’m seeing it in the field. You're not only focused on the work. You’re focused on helping each other, in countless ways," he said.
"You’re running food pantries and donation efforts. You’re working flex schedules to take care of your families. You’re sharing job responsibilities with your colleagues. You’re gritting your teeth, getting the job done, and setting the standard for what putting the public first actually means in this environment."
Copyright © 2019, ABC Radio. All rights reserved.