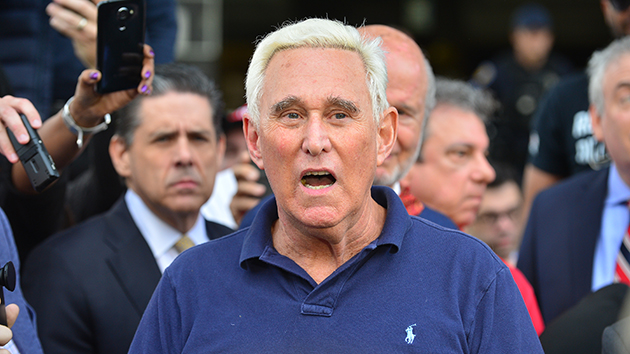 Photo by Johnny Louis/Getty Images(NEW YORK) — Roger Stone is gearing up for a fight.
The longtime GOP operative and confidante to President Donald Trump, lacking his trademark sartorial flair following a pre-dawn arrest, told reporters on Friday that he plans to dispute a seven-count indictment brought against him by special counsel Robert Mueller.
“I am falsely accused of making false statements,” he said Friday outside the federal courthouse in Fort Lauderdale, Florida. “I look forward to being fully and completely vindicated.”
Stone, 66, struggled to shout over protesters chanting “lock him up!” – a reference to chants of “lock her up” directed at Democratic presidential nominee Hillary Clinton at Trump rallies during the 2016 campaign.
Despite the incessant jeers, the self-described “dirty trickster” appeared in his element. He seemed to revel in the circus atmosphere, imitating Richard Nixon’s famous two-handed peace sign wave as he emerged from the courthouse.
“As I have always said, the only thing worse than being talked about is not being talked about,” he said at the beginning of his remarks.
Special counsel prosecutors unsealed a seven-count indictment against the longtime GOP operative on Friday morning. The charges largely relate to false statements Stone is accused of making to the House and Senate Intelligence Committees regarding his communications with associates about Wikileaks.
The indictment includes five counts of lying to Congress, one count of obstruction of an official proceeding, and one count of witness tampering.
An attorney for Stone characterized his alleged lies to two Congressional committees as “something he honestly forgot about.”
Stone pledged to fight the charges and reiterated his support for President Trump, a man for whom he supports politically and considers a close friend.
“There is no circumstance whatsoever under which I will bear false witness against the president,” he said. “I am one of his oldest friends. I am a fervent supporter of the president.”
Stone also took issue with the nature of his arrest.
A swarm of FBI agents wielding long guns and tactical gear took Stone into custody at his Fort Lauderdale, Florida, home before dawn on Friday and obtained search warrants for his homes in Florida and New York City.
“They could simply have contacted my attorneys and I would have gladly surrendered voluntarily,” Stone said. “They terrorized my wife, my dogs. I was taken to the FBI facility, although I must say the FBI agents were extraordinarily courteous.”
In a motion to seal his indictment, prosecutors wrote that “law enforcement believes that publicity resulting from disclosure of the Indictment and related materials on the public record prior to arrest will increase the risk of the defendant fleeing and destroying (or tampering with) evidence.”
Stone will appear in a Washington, DC, federal courthouse next week for his arraignment.
Copyright © 2019, ABC Radio. All rights reserved.

Pulse oximeters, used to fight COVID-19, may be inaccurate on people of color: FDA
No charges filed against Rochester police officers involved in death of Daniel Prude
Biden HHS nominee to highlight experience as GOP gears up for fight
Fauci on COVID-19 fight: US has ‘done worse than most any other country’
Sandy Twp Police: man walks into home looking for previous resident, rear-end crash, fight at Sheetz
South Dakota AG Jason Ravnsborg faces 3 misdemeanor charges for fatal crash