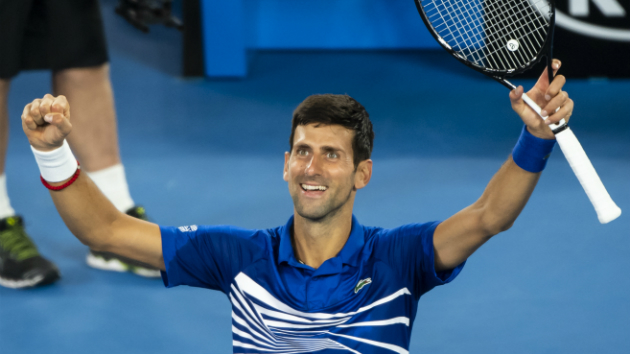 TPN/Getty Images(MELBOURNE, Australia) — The stage has been set for the Australian Open final on Sunday.
Novak Djokovic advanced to the championship match on Friday after dominating France's Lucas Pouille in three straight sets, 6-0, 6-2, 6-2, in the semifinals.
Djokovic, the top seed in the world, will now face No. 2 seed Rafael Nadal as the two battle it out for the trophy on Sunday. Nadal, 32, advanced to the final on Thursday after defeating Greece’s Stefanos Tsitsipas 6-2, 6-4, 6-0.
Djokovic, 31, is seeking his seventh Australian Open title and 15th Grand Slam victory overall.
Nadal, meanwhile, is on the quest for his second win in Melbourne and 18th Grand Slam title.
Copyright © 2019, ABC Radio. All rights reserved.