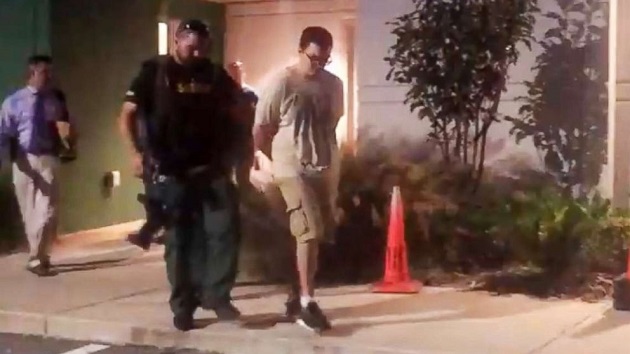 Shooting suspect Zephen Xaver seen being escorted by law enforcement. (Highlands County Sheriff) (SEBRING, Fla.) — Were it not for Florida residents Victor and Deanna Sparks, the gunman in Wednesday's deadly bank shooting may have gotten away.
The retired couple said they were one of the first to call 911, just after 12:30 p.m., when Zephen Xaver barricaded himself inside a SunTrust Bank in Sebring, Florida, and opened fire, killing five people.
"I wasn't sure what it was, but I knew I had to get out of there," said Victor Sparks, who was going inside to make a deposit. "I was afraid there might be someone helping him in the parking lot so I just pretended to walk away calmly back to our car. As I walk back to the car, that's when I heard it — two big bangs."
Deanna Sparks, who was waiting for her husband in the car, she said had a bad feeling when she saw the look on her husband's face after he turned around and didn't enter the bank.
"I asked why he didn't go in, and he said, 'There's either a bank robbery, or some kind of drill,'" she recalled. "I told him, 'There's no officers in the parking lot — it must be a bank robbery.' We drove out of the lot and I called 911."

The couple had planned to get to the bank earlier but were delayed by other errands.
"Had we gotten to the bank a little sooner, I could be a widow right now," Deanna Sparks said. "We just wish they could have all been saved."
"The police came in 90 seconds, and that's when it hit me — I really got shook up," Victor Sparks added. "I know all the people at that bank."
Police arrested Xaver, 21, who dialed 911 from inside the bank to confess before he barricaded himself inside. He later surrendered, and police don't yet know his motive.
None of the victims have been identified.
The Sparks were questioned by police, but didn't learn until seeing news reports that five people had been killed.
"We got in the car and went to church," Victor Sparks said. "The Lord's hands were on me today. We are praying for all those families who lost their loved ones today and for the parents of that boy who just blew his life away for no reason."