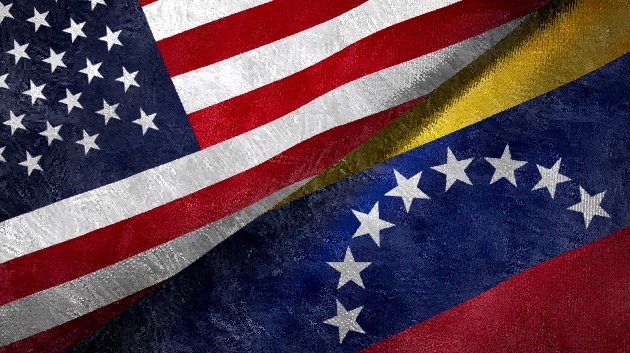 Oleksii Liskonih/iStock(WASHINGTON) — President Donald Trump and Venezuelan president Nicolás Maduro have set themselves up for a showdown.
After Trump recognized Venezuelan opposition leader Juan Guaidó as the interim president on Wednesday, Maduro said he was severing diplomatic ties with the U.S. and ordering all American diplomats out of the country within 72 hours.
But Secretary of State Mike Pompeo said Thursday that would not happen: "The regime of former president Nicolás Maduro is illegitimate. His regime is morally bankrupt, it's economically incompetent, and it is profoundly corrupt. It is undemocratic to the core… We therefore consider all of its declarations and actions illegitimate and invalid," he said during a special meeting of the Organization of American States in Washington, D.C.
That leaves Maduro with a choice: Take action to remove the diplomats, or stand down on his order.
But Pompeo warned Maduro in a statement Wednesday, "The United States will take appropriate actions to hold accountable anyone who endangers the safety and security of our mission and its personnel." National Security Adviser John Bolton reiterating Thursday that all options are on the table.
Venezuela's armed forces reiterated their allegiance to Maduro Thursday, with Defense Secretary Vladimir Padrino López calling Guiadó's claim to power "reproachable," "against the state of law in this country," and an attempted coup backed by the U.S.
López made no mention of the American diplomats but urged peace among Venezuelans: "We're here to avoid at all costs a fight among Venezuelans. A war between brothers won't solve the problems here, only dialogue will. We won't do anything outside the constitution."
Pompeo warned "remnant elements of the Maduro regime" against using violence against Guaidó or "to repress a peaceful, democratic transition."
But there is no transition now, with Maduro still in office and with the support of key institutions like the military. Instead, the two competing claims to power have pushed Venezuela into uncharted territory.
Venezuela has faced an economic crisis under socialist strongman Maduro in recent years, marked by sky-high inflation and massive shortages of food and medicine and forcing over three million refugees to flee across the border into neighboring Latin American countries.
The U.S. Embassy in Caracas has operated on limited staffing in recent years as Venezuela has sunk into crisis, but it does include several diplomats and their families. The facility was open Thursday, although all visa appointments had been canceled and American staffers were instructed to keep their children home from school amid ongoing protests in the country.
Juan Guaidó declared himself acting president in a rally with thousands of supporters on Wednesday, on a day that saw at least 12 people killed, according to a Venezuelan monitoring group, and 175 arrested.
Those protests continued Thursday against Maduro, who has consolidated power in recent years by dismissing the opposition-controlled National Assembly and creating a new "Constituent Assembly." He was sworn in again as president just weeks ago after an election that outside observers said was marred by fraud.
Guaidó was elected as president of the National Assembly in December, rallying opposition around him and making the bold move to declare himself president Wednesday. After he did so, he went into hiding amid fears he could be arrested or harmed by Maduro's security forces.
Bolton said the U.S. would move quickly to bolster Guaidó and the National Assembly as a new government, with Pompeo promising $20 million of humanitarian aid for food and medicine. Maduro has blocked the U.S. from bringing any aid into the country.
In a coordinated message, the U.S. recognition of Guaidó was joined by several other Western Hemisphere countries, including Canada, Colombia, Brazil, Argentina, and Peru. The European Union vocalized support for Guaidó and the National Assembly, but stopped short of recognizing his claim as head of state and instead called for free and fair elections.
But several longtime allies of Maduro, including Cuba, Bolivia, and Iran, rushed to his support on Thursday. Russia accused the U.S. of backing an illegal coup and asserted continued support for Maduro, who has signed billions of dollars worth of arms contracts with Russia and sold control of some state-owned energy resources.
Pompeo called on all other members of the Organization of American States to follow suit, but neighbors in the region like Mexico and many Caribbean countries have not yet followed suit.
Copyright © 2019, ABC Radio. All rights reserved.