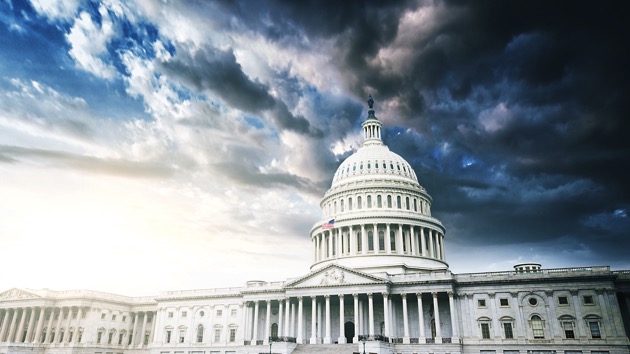 franckreporter/iStock(WASHINGTON) — On Day 34 of the partial government shutdown, the Senate was set to vote Thursday on two bills, one proposed by Democrats and the other a GOP bill that includes President Donald Trump's proposals, that could — though likely will not — end the history-making impasse.
Thursday's votes are on moving forward to debate and toward a final vote on each bill, and both bills will need at least 60 votes to advance. The Democrats need 13 Republicans to pass the initial vote on their measure.
The Republican bill mirrors the president's proposal from Saturday — a three-year extension to Temporary Protected Status recipients and about 700,000 so-called “Dreamers,” undocumented immigrants brought to the U.S. as children and given protected status under DACA, or the Deferred Action for Childhood Arrivals program, in exchange for border wall funding. Democrtats and other critics say the president's proposal undercuts some protections for immigrants.
The measure proposed by Democrats doesn't include additional funding for a border wall and instead would fund the government until Feb. 8, giving time for negotiation while getting 800,000 furloughed federal employees back to work and getting paychecks.
Trump announced late Wednesday night that he would hold off on giving a State of the Union address until the government reopens, a decision forced by House Speaker Nancy Pelosi.
About a quarter of the government remains unfunded including the Department of Homeland Security, prompting a letter from five former secretaries of the department — including Trump's former chief of staff, John Kelly.
DHS should be no different than the Department of Defense, the former secretaries wrote, which is funded in the shutdown and which is similarly important to defending national security. The secretaries also wrote that the shutdown was tempting talented employees to turn to the private sector — a problem that grows with each week the shutdown persists.
"High-tech skills – such as information technology and cybersecurity – and law enforcement and security experience are in great demand in the private sector and the Department is facing a real crisis in retaining this workforce week after week," wrote former DHS Secretaries Tom Ridge, Michael Chertoff, Janet Napolitano, Jeh Johnson and Kelly.
The IRS, also not funded during the shutdown, is also facing difficulties among the legions of employees who are working without pay — now 46,000 of them after a recent recall in attempt to mitigate the impact of the shutdown, especially ahead of pressure to process tax returns.
IRS employees have begun claiming they can't fulfill the request to come back to work for the upcoming tax season because of financial hardship, a major federal employees' union said Wednesday. The move could slow down the agency's ability to issue tax returns and also ratchet up pressure on Trump and Congress to push through budget talks.
On Friday, many federal workers will miss their second paycheck because of the shutdown. More federal workers will miss a second paycheck on Monday, and by Tuesday, all 800,000 federal workers impacted by the partial shutdown will have missed a second straight paycheck. About a half-a-million of these federal employees are working despite missing pay.
The current shutdown is the longest in U.S. history, surpassing a 21-day shutdown that ended in 1996.
Copyright © 2019, ABC Radio. All rights reserved.