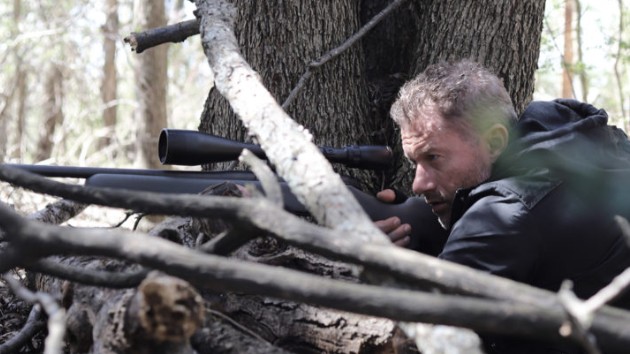 But for his new film The Standoff at Sparrow Creek, Dale went small: Set in one location, it centers on a group of militia members. Dale's character, a former police officer, is tasked with interrogating his militia comrades.

"There's been a shooting at a police funeral," Dale explains to ABC Radio, "and [the investigators] believe the shooter was a member of a militia. And these guys…take a look at their armory, and they realize they're missing an AR-15."

"And the film plays out as a whodunnit it from there, because these guys are trying to figure out who did it so they could actually turn him in."

The movie's schedule was as intense as the movie. "It was 18 shooting days we did in three weeks. We were doing six day weeks and mostly at night, you know? So it was it was a meat grinder — and that was a lot of dialog!" explains Dale.

"I rented this little house in this kinda cool [Dallas, Texas] neighborhood and there was a restaurant across the street," Dale recalled. "I got to know these guys, because we were working late hours…[T]hey'd close out the bar and the restaurant and they'd let me come in and then sit in the back [to eat], give me a bottle of wine — because I had to learn dialogue for the next day!"

His experience on director Shane Black's big-budget Iron Man 3 was a bit different.

"It was a wild film, man," recalls Dale, who played Savin, a super-powered henchman who tangled with Robert Downey Jr.'s titular hero.

The movie went on to make over $1.2 billion, and many consider it a major turning point in the films that are produced by Marvel Studios, which just earned a superhero genre-first: a Best Picture Oscar nomination for Black Panther.

"I love those guys. I had a great time. Learned a lot. And you know, the way the Marvel Universe works, once you do one character, that's kind of it, man. And I'm proud of that being my one and done," Dale says with a laugh.

The Standoff at Sparrow Creek is now in theaters and on demand.

Rumer Willis reveals she lost her virginity to a man that “took advantage” of her
‘Dawson’s Creek’ is heading to Netflix — minus its iconic theme song
Man in wheelchair killed in hit-and-run incident while crossing the street
Family of Black man who died in police custody describe ‘horrific’ bodycam video
Alex Smith reveals what went through his mind running onto NFL field for the first time in 693 days
One man dead after standoff at Daisy Street apartment, Clearfield