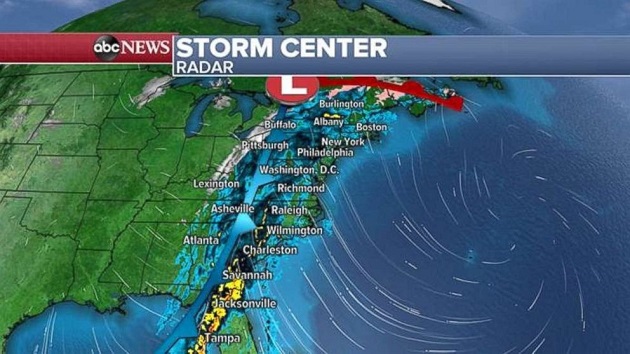 ABC News(NEW YORK) — Heavy rain stretches from Florida to Maine on Thursday morning with the major Northeast cities expecting storms during the morning and early afternoon hours.
The same storm brought very heavy rain to parts of the southern U.S., causing flooding in parts of Alabama, Mississippi and Florida on Wednesday. Mild air combined with heavy rain caused flooding in parts of Ohio as local waterways rose due to melting ice and rainfall. The storm also brought widespread snowfall from Iowa to Michigan with over 6 inches in spots.
Heavy rain was falling across parts of the Florida Panhandle and southern Georgia on Thursday morning. Rainfall rates could approach 2 inches per hour in the morning.
Rain will intensify in the Northeast as the cold front interacts with the unusually mild air and create heavy downpours in the major Northeast cities during the morning hours, and through the early afternoon.
Along with the heavy rain, wind gusts over 35 mph are possible Thursday in the Northeast, especially on the coast line. Winds on the coast could locally gust to 50 mph and cause power outages and damaging winds.
Rainfall totals of 1 to 2 inches are possible in the Northeast, which will cause localized flooding. In addition, mild air is rapidly melting snow and ice, which could cause additional flooding.
Temperatures will start to drop with the passage of a cold front and could bring some mixed precipitation to parts of the interior Northeast on Thursday. All accumulations should be on the light side, but wet surfaces could get icy in areas outside major cities.
Flood alerts and wind alerts have been issued for much of the East Coast through the day. Behind the storm, winter is beginning to make an intense push into the central U.S., with rounds of cold air, and a ground blizzard for parts of the Northern Plains.
There are several waves of cold air, likely each one increasing in intensity, lurking in the central U.S. and Canada. A cold blast has already begun to take hold of the central U.S. Thursday morning with wind chills in the single digits and teens from the upper Midwest to the Mississippi River Valley.
Another round of reinforcing cold air comes into the upper Midwest on Friday, and wind chills of minus 20 to minus 40 degrees likely in parts of the upper Midwest. Wind chills in Chicago and Milwaukee, Wisconsin, will be nearly minus 20 or lower.
Then, over the weekend, the cold air will widen in scope, but decrease in intensity. On Sunday another round of cold air starts to move in from Canada and begins to impact the upper Midwest. Wind chills will plummet again, with very cold temperatures likely lasting through daylight hours in places like Minneapolis, Minnesota, and Fargo, North Dakota. Wind chills on Sunday morning could dip below minus 40 degrees in the upper Midwest.
The blast of polar air tries to make its way into the rest of the central U.S. early next week. There are strong signals on both global operational forecast models that well below average temperatures are in store for much of the central and parts of the eastern U.S. next week. It is too early to determine how low the wind chills will go at this point.
But an intense cold blast will likely bring the coldest air so far this season to parts of the central U.S. next week.