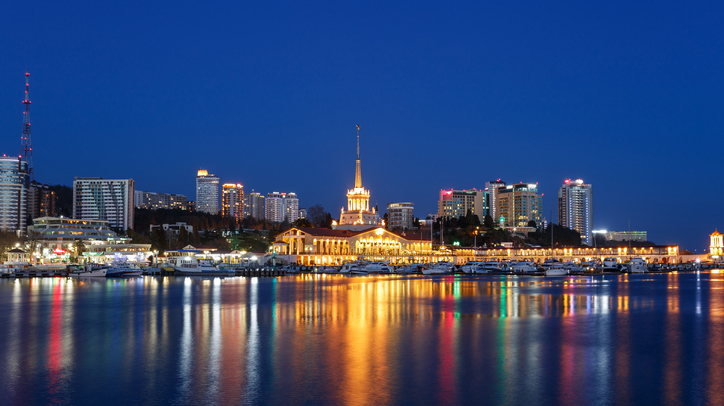 Sergey Gordienko/iStock(MOSCOW) — A Russian company has designed a board game inspired by a nerve agent attack that targeted a former Russian spy in the British city of Salisbury last spring.
The game is titled "Our Guys in Salisbury" and a photo of its box cover shows a path-way of colored squares tracking across Europe. Players are meant to guide their counters along the route, which takes in cities believed to have been visited by the suspected assassins. The game's finish line is Salisbury, which is marked on the box with a cathedral and two men in chemical protection suits.
Britain has accused Russia's military intelligence agency of carrying out the poisoning attack using a Russian military-grade nerve agent, which almost killed Sergey Skripal and his daughter, Yulia when it was smeared on their front door. A local woman later died after being inadvertently exposed to the poison, which is known as 'Novichok'.
UK police identified two Russian men as behind the attempted assassination, naming them as agents of Russia's Main Intelligence Directorate, known as the GRU. Russia has always denied involvement and has accused Britain of inventing the case or staging the poisoning itself.
The board game was found being sold on the site of the Russian retailer Galamart, marked as produced by the company, Igroland. The game is shown as being sold in a pack of six others, among them "Zoo World" and "Tank Battle". The set's price is listed on Galamart.ru as 49 roubles or about 74 cents.
British police have accused two GRU agents of travelling to Salisbury under the fake identities Ruslan Boshirov and Alexander Petrov, carrying the nerve agent disguised as a perfume bottle.
Investigations by independent researchers and journalists later proved the two were in fact Anatoly Chepiga, a special forces officer, and Alexander Mishkin, a military doctor, who had both been awarded Russia's highest state honor. The Telegraph and other international news outlets have reported that Chepiga and Mishkin travelled in Europe extensively in the years before the assassination attempt.
One of board game's creators, Mikhail Boeber told the independent Russian channel, TV Rain, he had made the game as a "humorous response" to the British allegations, which he said came from "Russophobia".
Despite the extensive evidence, very few Russians believe the UK allegations against Russia in the poisoning incident, and Russian officials have frequently treated the case as a joke. State media — and even senior officials — have responded to the UK claims sarcastically, with the country's embassies trolling the UK on social media.
"Boshirov and Petrov" have become a sort of comic duo in the Russian popular imagination after the duo gave a bizarre interview with the state-funded broadcaster, RT, in which they claimed they had visited Salisbury simply as tourists to see the city's cathedral spire.
Around the New Year holidays RT sent TV Rain, which is critical of the Kremlin, a model of Salisbury cathedral made from chocolate.
Some observers have suggested the flippant treatment of the case by Russia is intended to discourage Russians from engaging it seriously. That apparent campaign and the denials have had an effect — a poll in October by the independent Levada Center showed only three percent of Russians believe that their government was involved.
A British local councilor for Salisbury, though, said the board game was distressing.
"I'm shocked and saddened and I think it's quite a kick in the teeth for the people of Salisbury when we're working so hard to get back on track and do lots of positive things for the city," Jo Bloom, from the Conservative party, told The Telegraph.
The game's designer Nikita Filipov, though, told TV Rain that while he had made the game "with great patriotic feelings," he also liked to think of the game as "a symbolic bridge between Russia and Britain, the West."