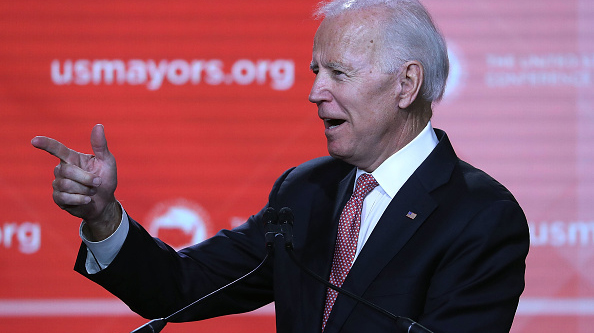 Mark Wilson/Getty Images(WASHINGTON) — As other Democrats announce their 2020 plans, and speculation builds about whether he, too, will run for president, Joe Biden is making one thing clear: if he does, he’ll chart his own course and do it his way.
But the question remains: Will Biden's bipartisan style align with the Democratic Party in 2020, or will it cause progressive Democrats to look elsewhere?
In a speech to the U.S. Conference of Mayors in Washington, D.C., Thursday, the former vice president addressed a recent New York Times report about another speech he made — to the Economic Club of Southwestern Michigan — in which he praised a GOP incumbent just before the 2018 midterms.
“I read in the New York Times today that one of my problems is, if I were to run for president, I like Republicans. Okay, well, bless me, father, for I have sinned,” Biden said to laughs, reciting what Catholics say in the confessional.
According to the Times, Biden was paid $200,000 for the speech and praised Michigan Republican Rep. Fred Upton — in attendance but unaffiliated with the event– as “one of the finest guys I’ve ever worked with,” for his work on a bill providing cancer research funding. The measure was passed in 2016, shortly after Beau Biden — Biden’s eldest son — died from cancer.
Biden’s praise for Upton puts him at odds with some in the Democratic Party hoping to win the Midwest battlegound — especially since Biden did not endorse Upton’s Democratic opponent. Upton won his race handily.
He brushed off the idea that his comments could be a liability if he decides to jump into the growing 2020 field.
“I don’t know how you get anything done unless we start talking to one another again,” Biden continued. “I went out and spoke at an event and [Upton] was there and I praise him and he was in a race, but I praise him about the fight against cancer. His vote and his ability to join me — it mattered — saved people's lives and he stepped up and three other Republicans stepped up and helped us pass it.”
But Biden’s approach might not be what other Democrats see as the way to win 2020. Many have questioned if Biden’s bipartisan approach will make it difficult for him to gain support with the liberal wing of the party, who want to serve as a check on Republicans, rather than work with them.
It could set up for a make-or-break strategy for Biden — gambling that voters will respond to a seasoned politician who touts his success at reaching across party lines, and wants to win back blue-collar voters Democrats lost to President Trump in 2016 — over a new, ‘outsider’ candidate.
‘Middle-Class Joe’ isn’t backing away from his bipartisan roots.
“Vice President Biden believes to his core that you can disagree politically on a lot and still work together on issues of common cause, especially issues as essential as the fight against cancer,” Biden spokesperson Bill Russo told ABC News.
While Biden’s not apologizing for his bipartisan ways, he has acknowledged issues from his political past have raised questions about his future, including his votes on criminal justice.
In the 1980s, Biden supported several bills that increased penalties for drug users, including one that essentially lengthened sentences for crack cocaine users, most who were African-American, compared to those who convicted of using powder cocaine, who were mostly white.
On Monday, at the National Action Network’s annual Martin Luther King Jr. Day Breakfast in Washington, D.C., Biden acknowledged he'd made a mistake.
“It was a big mistake when it was made. We thought — we were told by the experts that crack — you never go back; it was somehow fundamentally different. It’s not different,” he said. “But it’s trapped an entire generation.”
“I haven't always been right. I know we haven't always gotten things right, but I've always tried,” Biden said.
Despite his silence on his 2020 plans, Biden has captured the top spot on several prospective 2020 polls of the Democratic Party.
Biden has previously said he feels he is “the most qualified person in the country to be president,” and will make his decision with his family in the early months of 2019.