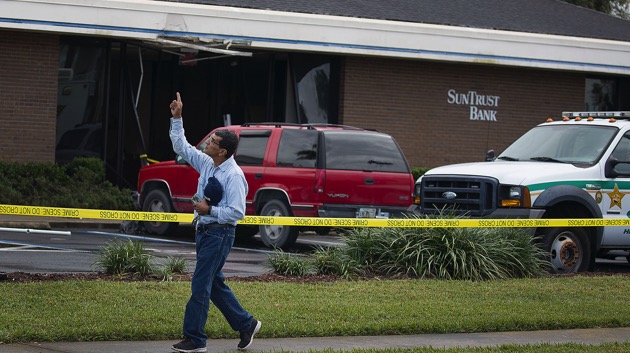 Joe Raedle/Getty Images(SEBRING, Fla.) — Five people — all women — were gunned down inside a Florida bank in an apparent "random" mass shooting, police said Thursday.
Authorities raced to the SunTrust Bank in Sebring, Florida, on Wednesday afternoon after 21-year-old Zephen Xaver allegedly killed the victims, then called 911, telling dispatchers, “I have shot five people.”
The victims were found lying face-down on the floor of the bank's main lobby, according to court documents.
Cynthia Watson, 65, a customer, and Marisol Lopez, 55, a bank employee, were among those killed, police said Thursday, as was employee Ana Piñon-Williams, her family said.
A mother of seven, Williams had only been on the job a few weeks, her brother-in-law, Tim Williams, said Thursday.
"Her life was truly a light in this world," he said.
The families of some victims requested their names not be released, police said.
Xaver "knowingly and intentionally took the lives of five of our fellow community members…our sisters, our mothers, our daughters and our co-workers," Sebring Police Chief Karl Hoglund told reporters Thursday, at times overcome with emotion.
A sixth person — an employee — was in a back break room when the incident began. Upon hearing shots, the employee ran out a back door and contacted police, the sheriff's office said.
Highlands County Sheriff Paul Blackman said the mass shooting "shocks and angers me more than anything I have encountered in my career."
Police said the motive is not known. Authorities do not believe anyone was targeted and said there's no known connection between the suspect and victims.
The 21-year-old was armed with a 9mm handgun and wore a bulletproof vest, according to the probable cause statement.
"While we still don’t know what drove the suspect to commit this heinous act, there is no excuse that can justify the cold-blooded murder of multiple victims," Blackman said in a statement Wednesday.
Dressed in a black and white jail jumpsuit, Xaver appeared before a judge Thursday morning and was formally charged with five counts of "homicide murder premeditated."

Besides a “yes sir” when informed of the charges, the alleged shooter said nothing in court.

The judge said Xaver had “no income, assets, or dependents.” He was denied bond.
As authorities work to determine a motive, the suspect's background is coming to light.
Xaver worked for two months as a correctional officer trainee but resigned in January, the Florida Department of Corrections said. He had no discipline issues and it was not clear why he resigned, a spokesperson said.
The mass shooting, which has left residents of the small city in shock, comes weeks before Florida marks the first anniversary of the Parkland school shooting in which 17 students and staff were killed.
The sheriff said, “I pray for the victims, their families and our community. This tragedy will have a lasting impact on Highlands County and likely this community will never be the same."
Florida Gov. Ron DeSantis called it "a terrible day for Sebring, Highlands County and for the state of Florida."
"This is an individual that needs to face very swift and exacting justice," the governor said of the suspect.
Hoglund said in a statement, "We will continue to investigate and work to see that the victims and their families are taken care of and that they receive the justice they deserve."