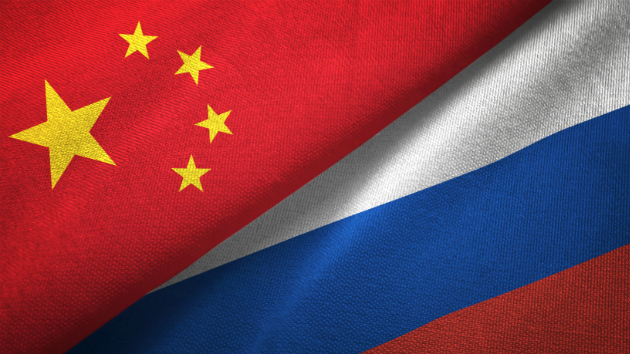 Oleksii Liskonih/iStock(WASHINGTON) — The U.S. intelligence community has laid out its comprehensive strategy for the next four years, highlighting threats from Russia and China exacerbated by the “weakening” of the post-WWII order and those nations’ embrace of “rapid advances” in modern geopolitical battlefields from cyber to outer space.
“Traditional adversaries will continue attempts to gain and assert influence, taking advantage of changing conditions in the international environment — including the weakening of the post-WWII international order and dominance of Western democratic ideals, increasingly isolationist tendencies in the West, and shifts in the global economy,” reads the 2019 National Intelligence Strategy, a 36-page document published by the Office of the Director of National Intelligence (ODNI) on Tuesday.
Intelligence officials predict that Russia will attempt to “increase its influence and authorities,” which “may conflict with U.S. goals and priorities in multiple regions,” while China is expected to continue to modernize its military and pursue “economic and territorial predominance in the Pacific region and beyond.”
A senior ODNI official told reporters Tuesday that Russia was pursuing capabilities to threaten U.S. interests with “vim and vigor” not seen since the heyday of the Cold War.
In the strategic document officials highlighted concerns about technological advancements made by both countries in space. Russia and China will continue to "pursue a full range of anti-satellite weapons,” officials predict, “as a means to reduce U.S. military effectiveness and overall security.”
But U.S. intelligence officials remain hopeful that there is room to work with China, at least, in areas of “mutual concern,” such as North Korea’s nuclear and ballistic missile programs.
Asked about the impact of the Trump administration’s own strong criticisms of international agreements and institutions in the post-WWII order, a senior ODNI official told reporters Tuesday that one of the “great joys” of working in intelligence was that they don’t dictate policy, only provide information to policymakers. Another official said that regardless of the administration’s own position, the “global operating environment is complex,” and the messaging from the White House is all part of that complexity.
The document shows that the intelligence community also remains concerned about Iran, the only other foreign nation named in the document, because of its “pursuit of more advanced missile and military capabilities and continued support for terrorist groups, militants, and other U.S. opponents.”
Looking ahead, the document said the democratization of technology, especially communications technology, has “empowered non-state actors” in ways that can lead to destabilization — conditions ripe for exploitation by “some violent extremist groups.”
One of the greatest causes for concern, one senior ODNI official said, is the prospect of adversaries to work together where their interests align to challenge the U.S. The official declined to provide specific examples of such cooperation.
“The strategic environment is changing rapidly, and the United States faces an increasingly complex and uncertain world in which threats are becoming ever more diverse and interconnected,” the document reads.
Intelligence officials also predict that there will be a greater demand for “intelligence to support domestic security, driven in part by concerns over the threat of terrorism, the threat posed by transnational illicit drug and human trafficking networks, and the threat to U.S. critical infrastructure.”
Such intelligence work for domestic purposes would be done “in accordance with [Intelligence Community] authorities,” the document said, “with appropriate levels of transparency to the public, and with adequate protection for civil liberties and privacy.”
The report is the fourth National Intelligence Strategy, which is published every four or five years, that drives the priorities for the nation’s 17 intelligence organizations and ultimately aims to help policymakers “make informed decisions on national security issues, and to ultimately keep our Nation safe.”
The new strategy is broadly similar to the last iteration, published in 2014, that also focused on the threats from adversarial nation-states, extremist and transnational criminal organizations, and the unpredictable effects of the diffusion of technology.
But this year’s report does place particular emphasis on transparency. Director of National Intelligence Dan Coats presented the strategy to the ODNI workforce Tuesday, stressing that the U.S. intelligence community must also do everything it can to be open with the public about what it’s doing.
As part of that initiative, Coats said the strategic document, posted on the ODNI website, has no classified alternate version with “secret stuff buried in it.”
“We need to ensure to the American people that we can be trusted,” Coats said. “We need to build faith that we will always seek to do what is right.”
Copyright © 2019, ABC Radio. All rights reserved.