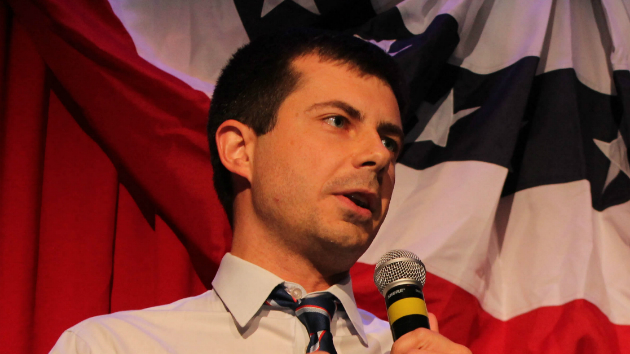 DEREK HENKLE/AFP/Getty Images(SOUTH BEND, Ind.) — Pete Buttigieg, the 37-year-old, two-term Democratic mayor of South Bend, Indiana, took a significant step toward a run for the White House on Wednesday, announcing that he is forming a presidential exploratory committee, the precursor to an official campaign.
Buttigieg (whose name is of Maltese origin and pronounced "boot-edge-edge") made the announcement in a video posted to his social media accounts.

I launched a presidential exploratory committee because it is a season for boldness and it is time to focus on the future. Are you ready to walk away from the politics of the past?
Join the team at https://t.co/Xlqn10brgH. pic.twitter.com/K6aeOeVrO7

Buttigieg, who ran unsuccessfully for chairman of the Democratic National Committee in 2017, is also set to embark on a book tour next month, beginning Feb. 10 in South Bend.
While not as well-known as many of the other top contenders for the Democratic nomination in 2020, Buttigieg has previously met with former President Barack Obama to discuss the upcoming presidential campaign. He also has made numerous appearances on cable networks in recent months, made a visit to the crucial early voting state of Iowa, and used his bid to become DNC chair to raise his profile and cast himself as a pragmatic politician who can appeal to voters in the Midwest, a key constituency Democrats hope to win back in 2020.
In an interview last year with ABC News' Political Director Rick Klein and Deputy Political Director MaryAlice Parks, Buttigieg said the coming campaign will test which "traditional" rules of American politics still apply in the era of President Donald Trump.
"I think in 2020 we're going to find out which of the rules of politics still apply and which ones have been broken forever. You know the president of the United States is basically a game show host. So I think any traditional answer … about paths to power in this country have at least been suspended if not done away with forever," Buttigieg said in the interview.
Buttigieg, who announced last year that he was not seeking a re-election to his current office, was just 29 when first elected as South Bend’s mayor in 2011, making him the youngest mayor of a U.S. city with a population of at least 100,000 people, according to the Washington Post.
He was commissioned as a Navy intelligence officer in 2009 and in 2013, while serving as mayor, he was deployed to Afghanistan for seven months.
A graduate of Harvard University and Oxford, Buttigieg is also the first openly-gay executive in Indiana history.
He came out publicly in a 2015 essay in the South Bend Tribune, less than two weeks before the U.S. Supreme Court legalized gay marriage nationally in the case of Obergefell v. Hodges.
"Being gay has had no bearing on my job performance in business, in the military, or in my current role as mayor," Buttigieg wrote. "It makes me no better or worse at handling a spreadsheet, a rifle, a committee meeting, or a hiring decision. It doesn’t change how residents can best judge my effectiveness in serving our city: by the progress of our neighborhoods, our economy, and our city services."
At 37, Buttigieg is thus far the youngest major Democratic candidate to declare a presidential bid to unseat President Donald Trump in 2020.
Copyright © 2019, ABC Radio. All rights reserved.