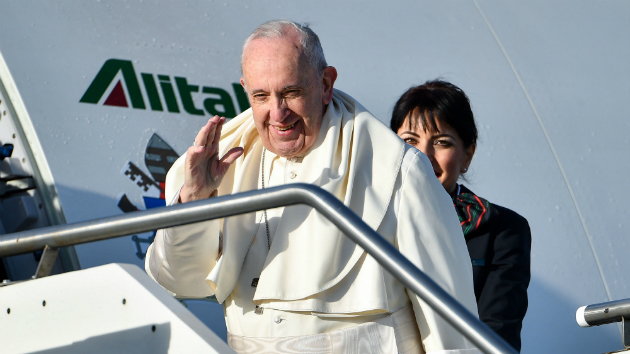 VINCENZO PINTO/AFP/Getty Images(ROME) — Pope Francis left Rome Wednesday morning for Panama on his 26th foreign trip since becoming pope.
He'll be in the Central American country until Sunday and plans to attend the Catholic Church's 34th World Youth Day, a gathering of Catholic youths from around the world.
The dates chosen for this year's World Youth Day allow students in the region to attend during their summer vacation. About 200,000 youths from more than 150 countries are expected to converge on Panama. The country sending the second-largest group of young people will be the United States, and more than 1,000 young indigenous people from around the world also will be attending.
The four days of events include the pope delivering seven speeches and celebrating two masses, as well as a penitential liturgy, and meeting young people unable to attend the festivities because they're in jail or living with HIV, drug and alcohol addiction. In his speeches, the pope is expected to address many problems which are common to Latin America, including gang violence, drug trafficking, migration, poverty, unemployment and broken family structures.
Ahead of the pope's arrival, young people in Panama issued a manifesto to draw attention to the world's environmental problems. They asked church officials and young Catholics to address pressing global environmental issues like climate change, a lack of biodiversity and the loss of ancestral lands for indigenous people.
"Time is running out and leaders from all sectors are showing very low ambition to embark in the rapid transformation that is needed to protect our precious common home and all its inhabitants," the statement said.

To show they meant what they said, more than 1,000 international young volunteers cleaned up Panama's Malecon Beach on Costa del Este, removing 15 tons of garbage.
The pope will return to the Vatican on Monday. His other foreign trips this year may include stops in the United Arab Emirates, Morocco, Bulgaria, Macedonia and Romania.
Copyright © 2019, ABC Radio. All rights reserved.