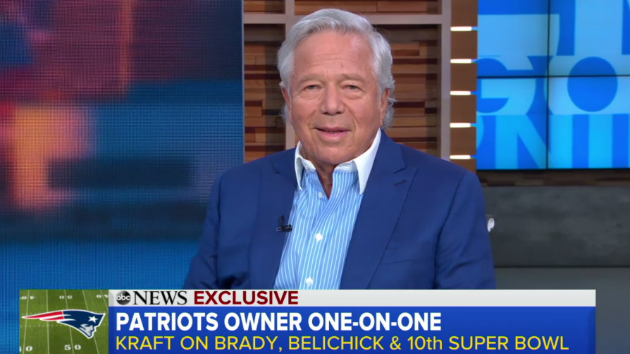 ABC News(NEW YORK) — New England Patriots owner Robert Kraft is Super Bowl bound for the 10th time in his 25-year tenure, but with one game between the Pats and a sixth NFL title, he's holding onto the winning attitude he's had since day one.
He also had a message amid some recent controversy: "I love the refs," he said in an exclusive interview on ABC News' Good Morning America Wednesday, noting with a strategic smile that he's still got one more game left in the season.
As the Patriots prepare to take on the Los Angeles Rams in Atlanta, Kraft said that despite what happened with the blown pass interference call that cost the Saints a trip to SB53, he thinks the referees "actually do a great job."
"I'll tell you in our game in K.C., there were a number of controversial calls that they had to get right and they got them all right," he said. "They have a tough job."
"In life, I learned things happen, nothing is perfect. No excuses, you make it happen, you do your best," Kraft said on GMA. "We have human errors sometimes, but we have to move on. And it's unfortunate, and we have to be diligent about trying to get it corrected."
This week marks the 25th anniversary of Kraft's then-NFL record $175 million purchase of the Patriots in 1994, and at the time he vowed to turn them into league champions.
"My objective in doing this is to help bring a championship to New England," he said in his first press conference as the owner.
Kraft has clearly surpassed his goal and become by far the most successful franchise in the league during his time at the helm with five Super Bowl championships in 10 appearances.
Nine of Kraft's trips to the Super Bowl have been with head coach Bill Belichick and quarterback Tom Brady, who Kraft said despite changes in physical appearance is still the exact same player he drafted 19 years ago.
"The thing that's most impressive to me, he is still the same guy that he was when he came out of Michigan and I met him, that skinny beanpole coming down the steps with that great physique," Kraft joked about the QB's slim stature.
"He's the same person today as he was when he was fourth on the depth chart back there in 2000," Kraft said.
Kraft added that when his wife passed away nearly eight years ago, Brady "was there for me in a way only my sons were."
All that to say, he would do anything to keep Brady, 41, around for another season.
"Once you have good people, the trick is to try to have continuity," Kraft said. "But please God, one more season that Tommy and Bill Belichick, who are the best at what they do in my opinion, will be with us for 20 years — two decades."
The team is headed back to the championship this year after falling short to the Philadelphia Eagles in their Super Bowl appearance last year.
But Kraft is confident that Brady's leadership, hard work and "selflessness" is the "key" to continuing the team's winning culture on Super Bowl Sunday.
"In anything in life the key is getting good people around you and creating a culture where everyone is open to disagree, but keep it in the family, which is hard sometimes, especially in the business that's so public," Kraft said.
As for any outside factors that could shake the team — like a fan who attempted to shine a laser pointer at Brady during the AFC Championship game on Sunday — Kraft said he is "laser focused."
"I just hear the word laser and I think of Tommy and his eyes — he was laser focused, and so whatever it was, I think it was a positive influence," he said. "But I think part of the security check has to be sure those kinds of things don't happen."

Why this tick season may be bad — and how to protect yourself
Henry Cavill teases fans — and tests their eyesight — with glimpse of second season of ‘The Witcher’
Elisabeth Moss’ “first love” is acting, but the director bug bit her hard in Season 4 of ‘The Handmaid’s Tale’
Allius Barnes promises a “really great moment between Vince and Ben” in the season finale of ‘Cruel Summer’
Sara Bareilles reacts to ‘Girls5Eva’ season two pickup: “We’re officially TWO hit wonders!”
‘Love, Victor’ stars Michael Cimino and George Sear on show’s “evolution” in season two