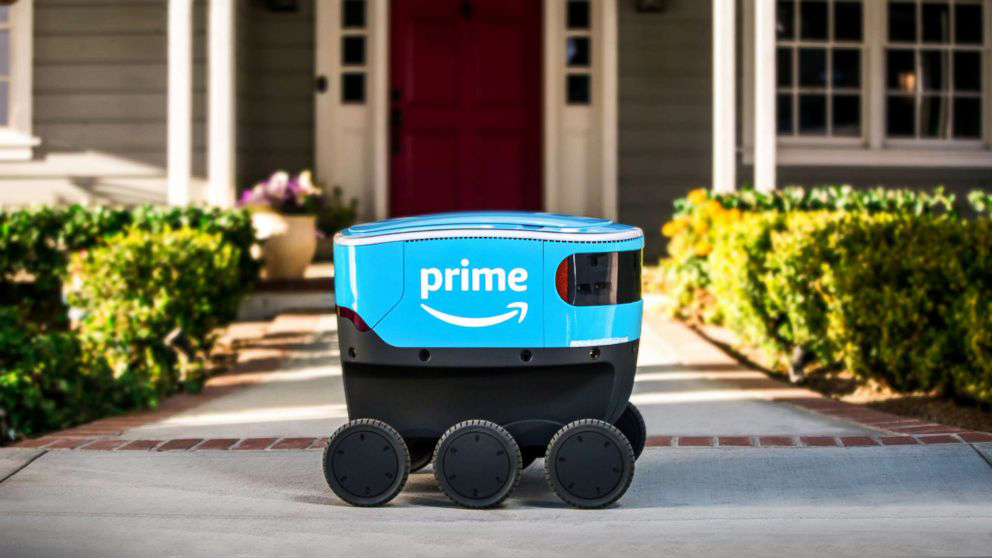 Amazon(NEW YORK) — Amazon launched a sidewalk robot delivery service on Wednesday, but it comes with a human chaperone.
"Amazon Scout," a blue-colored, six-wheeled, self-driving cart "the size of a small cooler," started delivering packages "at a walking pace" in Snohomish County, Washington, according to an Amazon blog post.
The pilot program is starting with a handful of autonomous robots in a Snohomish neighborhood, just north of Seattle. But that's not to say they'll be alone.
"We’re starting with six Amazon Scout devices, delivering packages Monday through Friday, during daylight hours. The devices will autonomously follow their delivery route but will initially be accompanied by an Amazon employee," the blog post said. Each robot will initially be followed by a human during the field test, but they are programmed to autonomously follow their routes.
A fleet of similarly sized robots also took to the streets of Washington D.C. in 2017, dispatched by Starship Technologies, a startup created in 2014 by Skype co-founders Ahti Heinla and Janus Friis. This week, the company announced it would start using the autonomous robots to deliver Blaze Pizza, Starbucks, and Dunkin’ orders for a flat rate of $1.99 at George Mason University in Fairfax, Virginia.

Arizona shooting spree suspect thought people were after him for prior shooting: Police
Murder suspect in alleged road rage shooting denied bail for posing ‘complete danger’: Judge
Juneteenth is now a national holiday. What’s next?
Meet Opal Lee, the ‘grandmother of the movement’ to make Juneteenth a federal holiday
Billy Porter says the theater industry marginalized him for being Black and queer
Ciara teases her Father’s Day plans for “incredible father” and hubby Russell Wilson