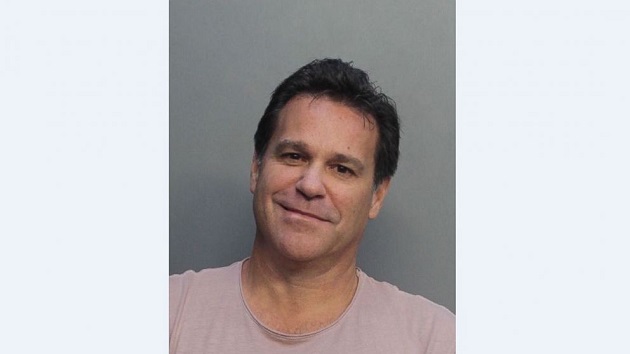 Broward County Jail(MIAMI) — Police arrested a man in Miami on Monday after he yelled racial slurs and waved a gun at a group of black protesters, according to video posted online.
Mark Bartlett, who is white, was charged with carrying a concealed firearm after he allegedly pulled a gun on protesters blocking a Miami street as a part of a demonstration on Martin Luther King Jr. Day.
Video posted on social media showed Bartlett wielding a handgun and yelling the N-word repeatedly.
"Get in front of my car, you f—ing piece of s—. N—— suck," the man yelled from the window of his black SUV. He continued to swear and yell racial slurs as he exited his vehicle, brandishing his gun and causing some of the protesters to scatter.
One of the teens involved in the incident said Bartlett threatened him before the video was filmed.
"He pointed the gun at me first inside his car. He told me to come to the car. I said, 'No sir. No sir. I'm not coming,'" 18-year-old Deante Joseph told ABC affiliate WPLG-TV on Tuesday. "He said, 'Black n—-r. You black n—-r. Get away from my car. Get away from my car.' We were holding up signs for housing. That's all we were doing."
Bartlett, 51, admitted he had a gun at the time, but said he only pulled it out to protect his girlfriend, who was arguing with one of the teens.
"All I see is 15 people running across the street toward my girlfriend — over the median, toward my girlfriend," he told WPLG. "My first reaction is I have a gun on me. Whether I have a gun on me or not, I'm running to see and to protect my family. I had a gun though. It wasn't loaded. I ran out there. You can see I never pointed it. I never threatened anybody. I just needed it in case something were to happen."
Bartlett was released on bond as of Tuesday evening, court records show, but community members said he should be hit with more serious charges.
“Assault with a deadly weapon and calling them n—–s sounds like a hate crime to me,” Miami City Commission Chairman Keon Hardemon said on Instagram. "Mark Bartlett was arrested but his charge doesn’t reflect his assault yet. Let’s see how our States Attorney's Office decides to file charges."
Miami Mayor Francis Suarez tweeted video of the incident and confirmed that a suspect had been arrested.
"I can confirm that the man in the video was arrested. His use of racist comments, especially on MLK Day, and threatening others with a gun will not be tolerated by anyone," Suarez wrote.
Miami-Dade State Attorney Katherine Fernandez Rundle also commented on the incident in a statement on Tuesday, promising to investigate the incident as a hate crime.
"I am outraged at the reported acts depicted in videos taken during the Brickell District incident on #MLKDay," she said. "I have assigned my Hate Crimes Unit Chief to handle this case & am committed to filing the appropriate charges & vigorously prosecute the case to fullest extent of the law."
Copyright © 2019, ABC Radio. All rights reserved.