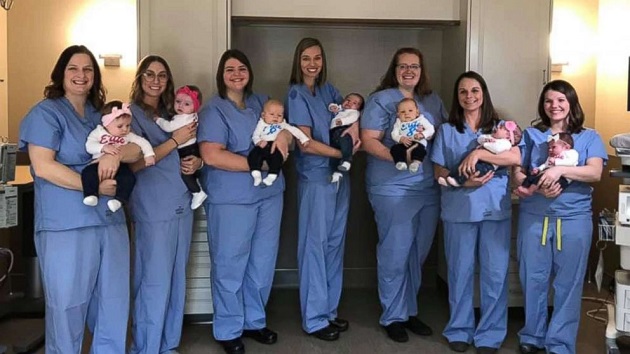 Anderson Hospital's Pavilion for Women(MARYVILLE, Ill.) — The obstetrics unit of a small Illinois hospital only has around 80 employees.
Eight of those employees — seven nurses and one nurse’s aide — gave birth to their own babies in a span of five months.
“We’d go in and tell our boss and then a week later another one would go in and tell her that she was pregnant,” recalled Rebecca Eggering, a nursery nurse at Anderson Hospital Pavilion for Women. “She was like, ‘We’ll just figure it out.’”
Eggering, 32, has worked at the Maryville, Illinois, hospital for the past 14 years. She gave birth to her first child, a son named Daniel, in November.
The first of the eight babies was born in August and the last was born in mid-December.
Michele Embick, who gave birth to baby No. 8, a daughter named Charlotte, was also the last to tell everyone that she was pregnant.
“Everyone started joking about who will be next,” Embick said. “There’s not very many of us that are child-bearing age so they started guessing and I kept it a secret because I didn’t want to tell people early on.”
“I just kept seeing all these people and I was like, ‘Oh man, another one,’” she added. “I don’t know if we just caught that baby fever because we deliver so many cute babies or what.”
Seven out of the eight nurses gave birth at the same hospital where they work. They all delivered healthy babies and two, including Embick’s daughter, by chance share the same name, Charlotte Rose.
The nurses said their small department felt like a family even before the pregnancies and more so after. They not only bonded with each other over cravings and a sensitivity to smells (hard when caring for babies, they say), but with their patients too.
“We were all going through what our patients were going through,” said Embick, a labor and delivery nurse. “It was just another level that we could bond with them.”
The hospital used substitute nurses to cover overlapping maternity leaves and had the benefit of the eight nurses already working different shifts, according to Eggering.
The moms still refer to the babies in the order in which they were born, baby No. 1, baby No. 2 and so on, and have nicknamed them the "Elite 8." One of the babies missed the group photo shoot because of a sibling's illness but overall they are all healthy, happy babies, according to Embick and Eggering.
Eggering said the babies have already had play dates and the moms have big plans to watch the kids grow up together.
“We all love what we do and we anticipate being here for a long time, so it’s great that our babies will age and grow together,” Eggering said. “They might not think it’s quite as neat when they’re teenagers, but we will.”