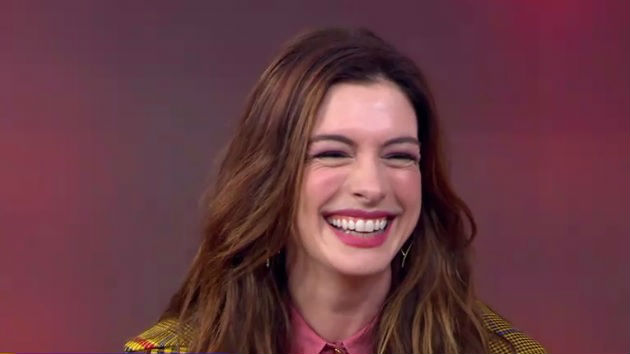 ABC(NEW YORK) — Anne Hathaway has an Oscar and a slew of movies under her belt, but she never faced a scene partner like Matthew McConaughey. Specifically, she tells Good Morning America that she's never faced a face like his.
Although she says her fellow Academy Award-winner is "like a brother to her," she admits McConaughey is so good-looking that she once forgot her lines while filming their new thriller Serenity.
"I'm looking at him, nobody is talking, and I go, 'Oh, it's my line. Why did I forget my line? Because you're handsome!'" Hathaway said on GMA, laughing. "I was just staring at him and I forgot my line because he looked like a fragrance model, which — then of course it occurred to me — he is."

McConaughey has appeared in ads for Dolce & Gabbana's fragrances.
In Serenity, Hathaway plays the ex-wife of McConaughey, a fishing boat captain. She asks him to save her and their young son from her new, violent husband by taking the husband out to sea and literally throwing him to the sharks.
"I don't really get offered things like this, to play a part like this," she said.
On GMA, Hathaway praised McConaughey for his true character and off-screen authenticity.
"I hope you all appreciate this — it's all real," she told the audience.
"It's not like he's doing a 'Matthew McConaughey voice' or telling a Matthew McConaughey story," she continued. "That's actually who he is, and to see someone be able to live his life with that much integrity as he does, as deep a family man as he is do his job with as much integrity as he [does], it's left a big impression on me because I hope to do that same."

Salma Hayek hilariously reveals how she lost ‘Matrix’ role to Jada Pinkett Smith
1-year-old girl wandered away from home, was not kidnapped
Senior citizens lost almost $1 billion in scams last year: FBI
US surpasses grim milestone with 600,000 lives lost to COVID-19
“It’s not the years, it’s the mileage”: ‘Raiders of the Lost Ark’ turns 40 on Saturday
Matthew Perry announces he and Molly Hurwitz have ended their engagement