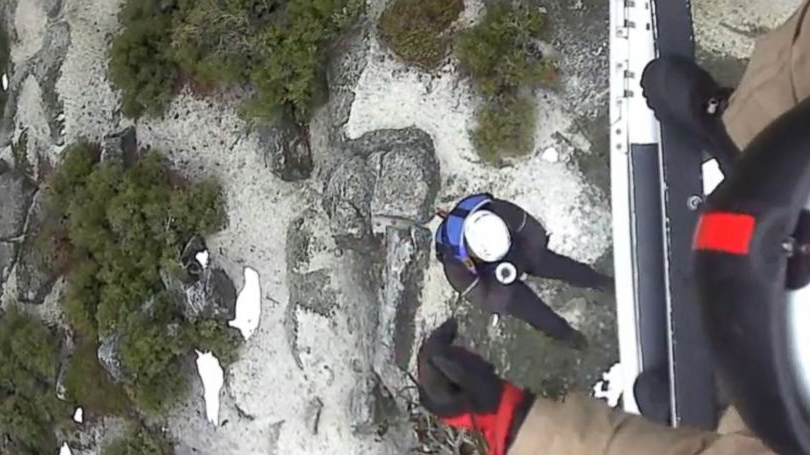 Central Division Air Operations(NEW YORK) — Video has been released of two hikers being rescued by helicopter after getting trapped at Yosemite National Park.
The rescue took place on the morning of Jan. 16, after the pair got stuck in a crevasse on the North Dome the night before.
In a video posted on the California Highway Patrol Central Division Air Operations' Facebook page, the CHP H-40 helicopter can be seen flying through Yosemite Valley.
The video then shows the view from the helicopter looking down, with a rescuer lowering a rope and the stranded hikers being fastened and then pulled up and into the helicopter.
Then helicopter is later seen eventually landing in Ahwahnee Meadow, where other personnel were waiting.
A post on Yosemite National Park's Facebook page said dispatchers were called at 6:30 p.m. on Jan. 15, but rangers and search-and-rescue personnel were unable to reach the hikers that night "due to darkness, rain, sleet, and fog, and the technical terrain."
The California Highway Patrol said the helicopter began searching in the last known location of the hikers on Jan. 16 before finding them in the crevasse on the east side of North Dome.
According to the California Highway Patrol, the hikers — who CHP identified as two men from England in their mid-20s — said they lost the trail in the snow while hiking into Yosemite Valley.
They became trapped in the crevasse and called 911 from a cell phone after being unable to continue further because of a 2,000-foot drop or go back because the path was too steep and covered in snow.
The two hikers were not injured, according to Yosemite National Park.