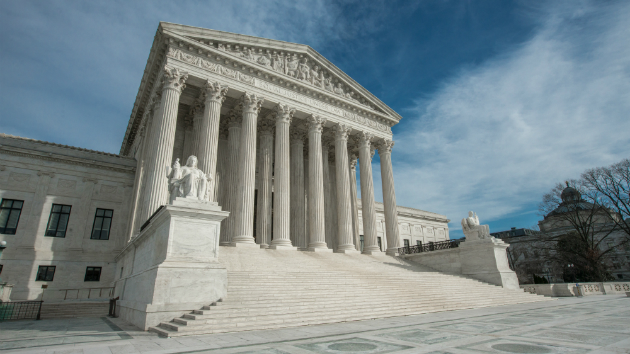 dkfielding/iStock(WASHINGTON) — The Supreme Court on Tuesday — by a 5-4 vote — has granted the Trump administration's request to begin enforcing a ban, with some exceptions, on transgender military service members while legal appeals continue.
The move, which is temporary, reverses a lower court order that had put the policy on hold. The court said Justices Ruth Bader Ginsburg, Stephen Breyer, Sonia Sotomayor and Elena Kagan would have denied the request to stay the lower court's order.
Separately, the court rejected the administration's request for an expedited review of the issue before lower appellate courts have weighed in.
Advocates estimate more than 15,000 transgender Americans are currently serving in the U.S. military and that more than 134,000 are veterans.
A memo from then-Defense Secretary James Mattis' last February memo cited 8,980 service members who identify as transgender, "and yet there are currently only 937 active duty Service members who have been diagnosed with gender dysphoria since June 30, 2016."
In 2017, President Donald Trump tweeted that he would no longer “accept or allow” transgender individuals to serve in the military, prompting the Pentagon to scramble to revise its policy and triggering legal challenges from critics who called the move discriminatory. The ban so far has never taken effect.
"As always, we treat all transgender persons with respect and dignity. DoD's proposed policy is NOT a ban on service by transgender persons. It is critical that DoD be permitted to implement personnel policies that it determines are necessary to ensure the most lethal and combat effective fighting force in the world," a Pentagon spokesman said Tuesday following the court's decision.
In a March memorandum, Trump concurred with the policy recommendations of then-Defense Secretary James Mattis that transgender individuals "with a history or diagnosis of gender dysphoria" are unable to serve except under limited circumstances. That policy was constrained by existing court orders that blocked earlier attempts to ban transgender troops.
“For more than 30 months, transgender troops have been serving our country openly with valor and distinction, but now the rug has been ripped out from under them, once again," said Lambda Legal Counsel Peter Renn. "We will redouble our efforts to send this discriminatory ban to the trash heap of history where it belongs.”
The Justice Department vowed to keep defending the Trump policy in the courts.
“We are pleased the Supreme Court granted stays in these cases, clearing the way for the policy to go into effect while litigation continues. The Department of Defense has the authority to create and implement personnel policies it has determined are necessary to best defend our nation," DOJ spokesperson Kerri Kupec said in a statement.

"Due to lower courts issuing nationwide injunctions, our military had been forced to maintain a prior policy that poses a risk to military effectiveness and lethality for over a year. We will continue to defend in the courts the authority and ability of the Pentagon to ensure the safety and security of the American people,” the DOJ statement continued.

How a possible ban on spectators at Tokyo Olympics could impact athlete performance
Caitlyn Jenner says she wants to be ‘a thoughtful disrupter’ like Trump
AG Garland defends DOJ decision to continue to back Trump in E. Jean Carroll defamation case
Police did not clear Lafayette Park area so Trump could hold ‘Bible’ photo op: Watchdog
Arizona Senate president says in emails Trump called to thank her for ‘audit’
Man charged with impersonating Trump to defraud hundreds