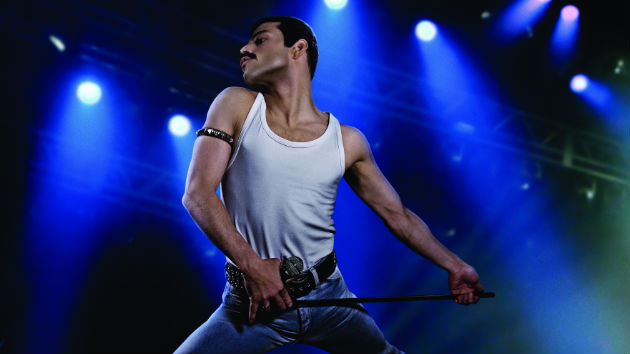 Rami Malek in "Bohemian Rhapsody" – © 2018 Twentieth Century Fox Film Corporation(LOS ANGELES) — Nominations for the 91st annual Academy Awards were announced this morning, and Roma and The Favourite led the pack with 10 nominations apiece, followed by A Star Is Born with 8 and Black Panther with 7 — including a superhero genre first: a Best Picture nod.

Here are some celebrity reactions:
Rami Malek, Best Actor, Bohemian Rhapsody, to E! – "It’s just something you never expect to happen. It’s like a distant dream that actors have and hope for to some degree. But it’s never really felt in the realm of possibilities — it’s a pretty joyous occasion to say the least….there’s something about hearing the words that you’re an Oscar nominated actor that are still going to be incredibly shocking. It’s a profoundly humbling moment for me."

Willem Dafoe Best Actor for At Eternity’s Gate, has been nominated before, but never as Best Actor. Regarding his surprise nod for playing artist Vincent Van Gogh, he tells ABC Radio: "You know the people that handicapped [the Oscars race] tend to be journalists and they don't know how films are made and they don't know our actors think sometimes…this is a nomination that comes from people, from the actors' branch of the Academy seeing the movie and acknowledging there's something interesting there."
Bradley Cooper, nominated for Best Actor, Best Adapted Screenplay and Best Picture for A Star Is Born tells E!: "Everyone who worked on this film truly risked putting themselves out there — in the hope that in doing so people will connect and feel something deep and personal — the way films have made me feel since I was a kid."

He adds, "So to be here today in a place where people who have seen the film are talking about how it makes them feel, something deep — that simple human thing — that we need each other — and the Academy to recognize that this morning, I just am so grateful."

Alfonso Cuaron, nominated for Best Motion Picture, Best Director, Best Original Screenplay and Best Cinematography for Roma: "Thank you to the Academy for recognizing Roma across these categories. Human experience is one in the same, and it’s so gratifying that a black-and-white film about life in Mexico is being celebrated around the world."

He adds, "We are living a great moment in cinema where diversity is embraced by audiences. This kind of visibility pushes our industry forward and creates more opportunity for new voices and perspectives to emerge."

Yalitza Aparicio – Best Actress, Roma: "From the very first casting call to this morning, my Roma journey has been extraordinary. As a daughter of a domestic worker and an indigenous woman myself, I am proud this movie will help those of us who feel invisible be seen."
Sam Rockwell, Best Supporting actor, for Vice, to E! – "Hot damn! I am so truly honored to be recognized by the Academy again this year. Vice is such a special and important film to be a part of."
Glenn Close, Best Actress nomination for The Wife, to Entertainment Weekly: "Everything to do with this movie has been a total joy…I’m so proud to be in a little film that has such great resonance with so many people. I’m especially proud to have shared the creation of this character with my beloved daughter Annie. So grateful!"

Mahershala Ali, Best Supporting Actor nod for Green Book, tells E!, "I'd like to thank the academy for recognizing my work along with the extraordinary performances of my fellow nominees….through [portraying] Dr. Donald Shirley, I had the gift of navigating circumstances as a profound, gifted, complicated genius…I sincerely hope Dr. Shirley's music and his unique contribution to our culture continues to be discovered, shared and appreciated."
Amy Adams, Best Supporting Actress nominee for Vice, tells E! – "Thank you so much to the Academy for this recognition. It is an honor to be nominated for a film that I loved making. I am grateful to Adam for writing such rich material and for creating such a wonderful work environment."

Emma Stone, Best Supporting Actress nominee for The Favourite, tells E!, "Working on The Favourite alongside my brilliant friends Olivia Colman, Rachel Weisz and the whole cast was nothing short of incredible. I was grateful every day and am honored by this nomination. [Director] Yorgos created a palace for us all to play in. I am forever indebted to him and the whole team that brought this insane vision to life."

Black Panther star and Oscar winning 12 Years a Slave veteran Lupita Nyong'o took to Twitter to comment on a throwback video of the cast hugging at San Diego Comic Con: "Seven #OscarsNoms for #BlackPanther including best picture!! This is our reaction the first time we saw footage from the film and we're feeling this way all over again today! Thank you @TheAcademy! #WakandaForever #Oscars."

Marvel Studios president Kevin Feige, nominated as one of the Black Panther producers, said, "This extraordinary recognition is an endorsement of what Black Panther represents for inclusion and for telling different kinds of stories. It has been humbling and gratifying to see the cultural impact this film has had, and it’s something we’re all very proud to have been a part of."

He added, "This could not have happened without our amazing cast and crew and our brilliant director, Ryan Coogler, who brought his unique talent, experience, and deeply personal vision to this story. And of course, I have to thank Stan Lee and Jack Kirby for bringing this character into the world to begin with."
Barry Jenkins' If Beale Street Could Talk was nominated for for Best Adapted Screenplay and Best Original Score categories, and Regina King was also nominated in the Best Supporting Actress category. Jenkins shared his sweet response on Twitter: "I'm always overseas when noms come out and I don't watch. Instead my publicist slips notes under my door and I find them when I return. MUCH love from the @BealeStreet family to QUEEN @Regina King and my right hand @NicholasBritell on their Oscar Noms!!!"

Beale Street Supporting Actress nominee Regina King said to E! "Wow, wow, wow. The word I keep coming back to is proud. Proud of our cast and crew with all the work we put into this amazing, yet still timely story. I'm grateful to Barry Jenkins for creating this beautiful role out of the great James Baldwin's words. Collaborating with Barry has been a highlight of my career and this recognition is icing on the cake!"

Richard E. Grant, Supporting Actor for Can You Ever Forgive Me? responded via Twitter: "Am levitating at this astonishing news. Thank you to @TheAcademy for this nomination in such incredible company. I’m indebted to so many people but most of all @melissamccarthy & Marielle Heller."

Phil Lord and Chris Miller, directors of Best Animated film nominee Spider-Man: Into the Spider-Verse, to EW: "This is an incredible honor. We’re grateful to the Academy for recognizing the work of more than 800 artists and filmmakers who came together to tell the extraordinary story of Miles Morales in a groundbreaking way….we’ve heard countless stories about parents whose children looked up at them while watching the film and said 'He looks like me,' or 'They speak Spanish like us,' or 'I want to grow up and be like her.'"

They add, "It's such a simple concept but that is the reason so many people worked so hard — to make a movie that was worthy of Miles and makes everyone feel powerful and seen. Now more than ever, the world needs everyday superheroes and we are counting on everyone."