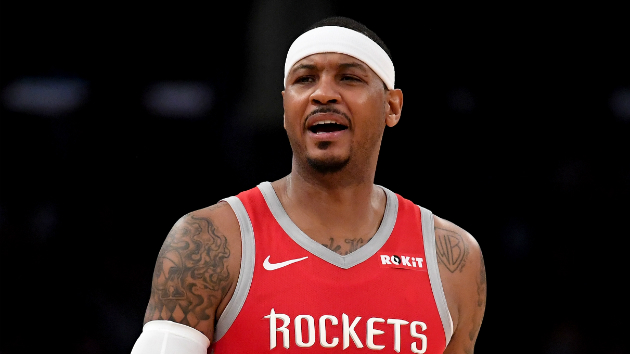 Harry How/Getty Images(HOUSTON) — Two months after announcing they would be “parting ways” with Carmelo Anthony, the Houston Rockets have reportedly reached a deal to send the 34-year-old forward to the Chicago Bulls.
As part of the deal, Houston will also be sending cash to Chicago, league sources told ESPN.
Despite being dealt to the Bulls, Anthony will not suit up and play for Chicago, according to the sources. They told ESPN the Bulls would either trade or waive him before Feb. 7, the day of the trade deadline.
Anthony, a 10-time All-Star, joined the Rockets last summer and played just 10 games with Houston this season before the team moved off of him.
“After much internal discussion, the Rockets will be parting ways with Carmelo Anthony and we are working toward a resolution,” Rockets General Manager Daryl Morey said in a statement on Nov. 15. “Carmelo had a tremendous approach during his time with the Rockets and accepted every role head coach Mike D’Antoni gave him.”
“The fit we envisioned when Carmelo chose to sign with the Rockets has not materialized, therefore we thought it was best to move on as any other outcome would have been unfair to him,” Morey added.
Copyright © 2019, ABC Radio. All rights reserved.