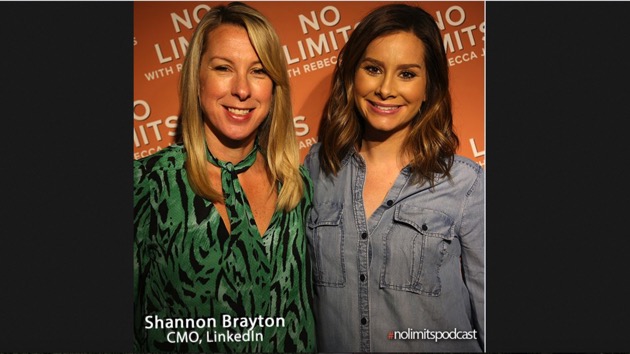 Taylor Dunn/ABC News(NEW YORK) — Shannon Brayton began her career in corporate America at only 19 years old. What started as a temporary position at Intuit, a software company, led to 24 years and counting of working in the tech world, watching the creation of Silicon Valley. Brayton is now in a c-suite role as Chief Marketing Officer of LinkedIn.
“Microsoft tried to buy Intuit while I was there, and Bill Gates came to the campus and I saw him in person and thought to myself, ‘I have to work in the Valley, this has to happen for me,’” Brayton told ABC News’ Chief Business, Technology and Economics correspondent, Rebecca Jarvis on an episode of the “No Limits with Rebecca Jarvis” podcast.
Brayton opted for a less traditional route, deciding to work full time during the day and take classes at night to complete her undergraduate degree. While making a significant amount of money at a young age and being able to brag about her work to her friends, Brayton still felt like an outcast in the Valley for not attending an Ivy League school or receiving a graduate degree.
“At some point I realized, probably 10 years into my 24 year career, actually I'm doing well here and I need to be good with this, I need to stop talking about the fact that I did this funky thing and started out when I was 19,” Brayton said.
It’s safe to say that while Brayton’s career path might have looked different than most other people in the Valley, it turned out to be a successful choice. After turning down a position from LinkedIn in 2008, Brayton ended up there just two years later. In 2015 she was promoted to CMO, a position she had previously told LinkedIn CEO Jeff Weiner she wasn’t interested in.
“I had been around marketing my entire career in the Valley, but I really didn't understand marketing,” Brayton explained. “I didn't always gel with marketers and I just didn't think it was going to be a fit both ways for the team or for me.”
What began as an 8-week trial run for Brayton to test out the positon turned into 3 1/2 years.
“I felt excited about, ‘Wow I'm actually learning a lot.’ I didn't know that I was bored because I was so busy,” Brayton said. “I was so crazed with my schedule, but I wasn't growing and I wasn't learning a lot. I basically had been doing the same job for 20 years.”
Running a marketing department for a major networking site takes a village, and Brayton said that hers works well because of the team’s transparency.
“I really encourage my team to be as honest as possible about whatever is causing them to leave a meeting or miss a trip or whatever it is, and I think it's really important that you don't hide parts of yourself that are key to you.”
Hear more from Shannon Brayton on LinkedIn tips and tricks on episode #120 of the “No Limits with Rebecca Jarvis” podcast.