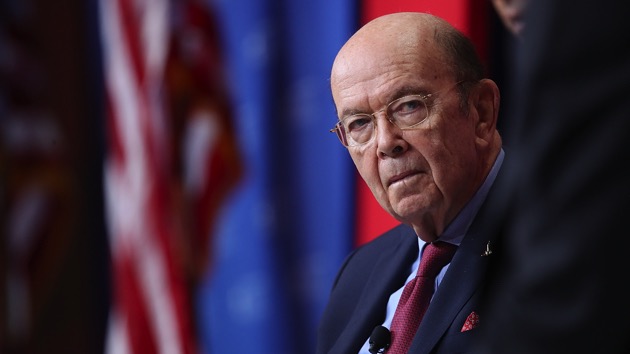 Win McNamee/Getty Images(WASHINGTON) — Commerce Secretary Wilbur Ross is scheduled to testify before the House Oversight Committee on Thursday, March 14, the committee announced Monday, setting up another high-profile hearing for the chief oversight panel following former Trump lawyer Michael Cohen's appearance in February.
Democrats, are expected to question Ross on efforts to add a citizenship question to the 2020 census, a controversial move that has prompted legal challenges.
"After several weeks of discussions, Secretary Wilbur Ross has now agreed to testify before the Oversight Committee voluntarily and without a subpoena," House Oversight Committee Chairman Elijah Cummings, D-Md., said in a statement. "Committee Members expect Secretary Ross to provide complete and truthful answers to a wide range of questions, including questions regarding the ongoing preparations for the census, the addition of a citizenship question, and other topics. The Committee also expects full compliance with all of our outstanding document requests prior to the hearing.”
Last week, a federal judge in New York blocked the Trump administration from asking about citizenship in the 2020 census, finding that Ross "violated the public trust" in his effort to insert the citizenship question, calling his decision to do so "arbitrary and capricious."
While the Supreme Court said last week that it won't hear a case related to the citizenship question that was scheduled to be argued next month, the issue could make its way back before the highest court in the future.
Copyright © 2019, ABC Radio. All rights reserved.