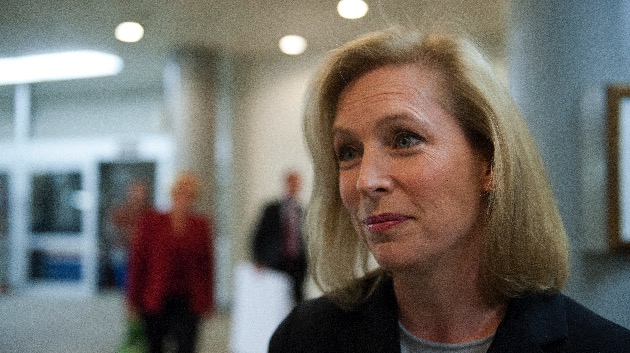 Douglas Graham/CQ Roll Call(WASHINGTON) — In a new round of staff hires, Sen. Kirsten Gillibrand’s presidential exploratory committee is making diversity a key priority, as she and other Democratic hopefuls try to position themselves for a long primary battle.
Gillibrand’s newest round of campaign staff hires, announced Tuesday morning, includes several veterans of her Senate office and previous congressional campaigns. The group includes two African American staffers, one Latina and one Filipina. Of the six new staffers, four are women. “We are proud to announce the hiring of this talented group of strategists, who together have exceptional records of success at the national, state and local level,” said Gillibrand communications director Meredith Kelly. “The campaign is firing on all cylinders coming off of Senator Gillibrand’s successful trip to Iowa, and these dynamic new hires will build on that momentum.”
The emerging field of 2020 Democratic presidential contenders is already breaking records for diversity and includes several women, mothers, grandmothers and women and men of color. An LGBTQ candidate may announce his run as well soon.
Minority voters could also be more important in determining the Democratic nominee than in any primary year to date, up to and including 2008, as demonstrated by a recent report showing that Republican-leaning voter groups like "whites without a college degree" are likely to drop in 2020 while other groups, like African Americans, Hispanics and Asians are all expected to increase.
The campaign is also bringing on staffers who are party mainstays.
Evan Lukaske, most recently the Democratic Congressional Campaign Committee’s northeast press secretary, will join as Gillibrand’s national press secretary. Alexandria Phillips, who previously worked in both Gillibrand and Sen. Chuck Schumer’s Senate offices, will serve as traveling press secretary.
Stephanie Conahan and Erica Bordador, who were both part of her campaign fundraising team previously, will serve as finance and deputy finance director, respectively.
Gregory Smiley, the campaign manager on Gillibrand’s 2018 re-election campaign, will serve as her national political director. And Alexandra Sanchez, her Senate research director and adviser since Gillibrand joined the Senate in 2009, will serve as her research director.
Gillibrand announced her first round of campaign hires earlier this month, before her Iowa trip over the weekend.
While some likely Democratic candidates have not even made their announcements yet, others including Gillibrand and several of her Senate colleagues are already far along in standing up a robust campaign infrastructure.
Some of her Senate colleagues and primary opponents have also made major hires this month. On Friday, Massachusetts Sen. Elizabeth Warren announced that her campaign was bringing on four New Hampshire experts to support her in that state’s early primary.
California Sen. Kamala Harris announced that her presidential campaign, based in Baltimore, MD, will be managed by Juan Rodriguez, who also ran her 2016 Senate race, and chaired by Maya Harris, her sister and a former adviser to Hillary Clinton’s presidential campaign. Other Clinton alums on Harris’ team include general counsel Marc Elias, national finance director Angelique Cannon, senior adviser David Huynh and communications director Lily Adams.
Former congressman John Delaney, the first announced presidential candidate, already has six field offices open in the first caucus state of Iowa.
Copyright © 2019, ABC Radio. All rights reserved.