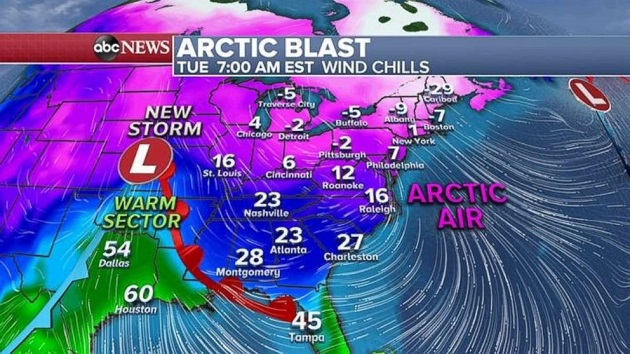 ABC News(NEW YORK) — After a brutally cold Monday, the eastern U.S. will be a bit warmer on Tuesday.
Wind chills Monday reached -30 in Albany, New York; -17 in New York City; -16 in Boston and -10 in Philadelphia.
Although slightly warmer, wind chills Tuesday morning are still near or below zero in much of the Northeast, with the cold extending all the way into the Southeast. The wind chill in Tampa, Florida Tuesday morning should be in the 40s.
A new storm developing in the central U.S. is forecast to move north into Canada, and, as a result, the warmer section of that storm will overtake much of the east, pushing up temperatures over the next 24 to 36 hours. Tampa will see a Wednesday high of near 80 degrees, while New York and Boston will be back up around 40.
Much of the Northeast Tuesday morning remains under wind chill alerts, which should subside by late morning as the cold loses its grip with milder air moving in.
The new storm in the West, meanwhile, is bringing snow into the Rockies and the upper Midwest. Wind alerts have been issued for this storm from Colorado to Michigan, including a blizzard warning just east of Denver with gusts of up to 45 mph. Heavy snow, as much as 10 inches, is making for dangerous travel conditions Tuesday morning.
Throughout Tuesday, bands of heavy snow will be moving into the northern Plains as well as parts of Iowa, Minnesota and Wisconsin, with snowfall rates of more than 1 inch per hour possible. By early evening, snow may just barely reach Chicago, dropping in bursts during rush hour.
The snow is likely to last through the night in the upper Midwest, with the heaviest totals from Iowa to Wisconsin, with more than 6 inches possible locally.
Heavy rain also is expected from Texas to Ohio, with localized flooding possible.
With colder air traveling behind this storm, parts of the southern U.S. may see a wintry mix on Wednesday and into Thursday. With the storm pulling milder air into the eastern U.S., precipitation in the major Northeast cities should stay as rain, not snow.
Another major cold blast could be following this new storm, bringing to the Midwest more brutally cold wind chills by the end of the week.