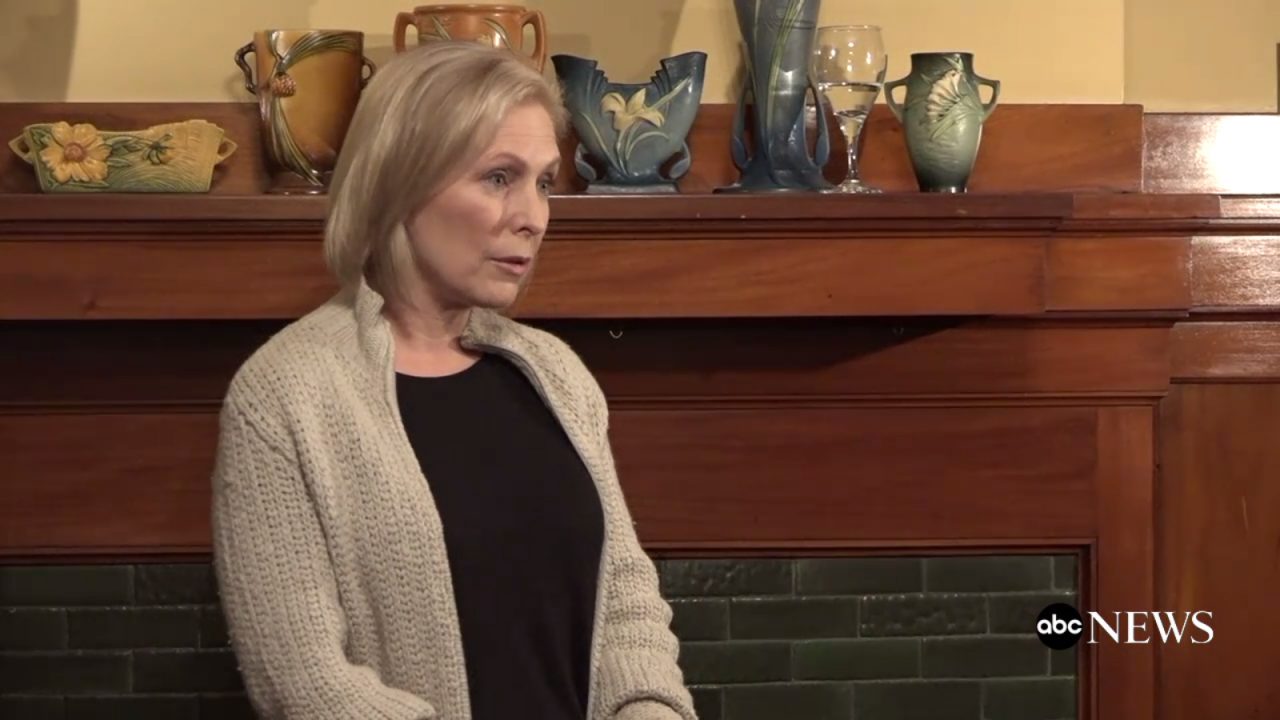 ABCNews.com(DES MOINES, Iowa) — Sen. Kirsten Gillibrand visited coffee shops, gift stores and even a brewing company to meet with voters during a whirlwind weekend trip in a push to make headway 13 months before the Iowa caucuses in what will be a crowded Democratic field.
The residents who gathered to hear her speak, came for a variety of reasons.
Sandi O’Brien, vice chair for the Woodbury County Democrats, went to a gathering in Sioux City on Friday during her lunch break and brought a copy of the senator’s book and a permanent marker for her to sign it.
“Today I’m not so much listening for policy as I am just to get a feel for her personally to see if she’s authentic and how she would do against [President Donald] Trump,” she said.
Janet Hopkins and her 15-year-old granddaughter, Chloe, saw the senator announce her presidential bid days earlier and went to meet her at a coffee shop in Sioux City to talk about universal healthcare.
“Chloe has had six open heart surgeries, she just got back from Mayo not too long ago,” Hopkins said. “If I’m gone or her parents are gone, is Chloe going to be able to provide for herself?”
The senator sat down with the two for several minutes and told Chloe to "keep going" and that she would fight for her. They also talked about school and what subjects Chloe likes to study. The senator noted that her son, Theo, is also 15.
Even at friendly meet-and-greets organized by local Democratic organizations, the senator from New York faced tough questions about some of the decisions she has made during her time in Congress.
At a house party organized by local Democrats, a resident asked the senator to explain why she used to have an “A” rating from the NRA.
“I had only really looked at guns through the lens of hunting. My mom still shoots the Thanksgiving turkey but when I became a senator I recognized I had a lot to learn about my state and all the 20 million people I was going to represent,” Gillibrand said.
Once considered a moderate Democrat, Gillibrand first served in the House and represented a Republican-leaning district in upstate New York where she admittedly had conservative views on topics like immigration and gun rights.
“I proudly have an ‘F’ rating with the NRA," she later added.
Throughout the weekend, Gillibrand was repeatedly asked about her comments on former Sen. Al Franken, D-Minn., who stepped down after multiple allegations of sexual misconduct were raised against him. She was the first senator to call on him to resign, a move that reportedly garnered some backlash from those among her ranks.
“My decision was not to remain silent and you have to stand up for what’s right, especially when it’s hard,” said Gillibrand. “If you create a pass because you love someone or you like someone, or admire someone, or they’re part of your team, it’s not okay. It’s just not.”
Not all Iowans saw her comments on Franken as contentious, in fact, it helped her clinch her first political endorsement. Kyla Paterson, the first transgender chair of the Stonewall Caucus of the Iowa Democratic Party, said she was moved to back Gillibrand because she called for Franken’s ouster.
“I would not have endorsed her if she didn’t,” said Paterson. “She stood on principle, not because it was an opportunistic thing.”
Gillibrand took the stage at the Women’s March Iowa where she spoke to a crowd of hundreds inside the state capitol as thousands more participated in marches across the country.
Cheers erupted as the presidential hopeful praised the victories that female voters have been able to achieve and she asked the crowd to picture a world with more women in power.
“Despite that progress, women still do not represent 51 percent of elected leaders in this country," she said. "Imagine just for a moment what America would look like if it did. Imagine what would be possible."