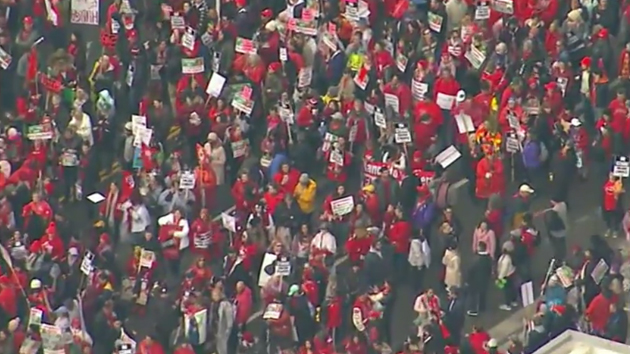 KABC-TV(LOS ANGELES) — As marathon talks to end the Los Angeles teacher strike were reportedly "making progress" Monday, union representatives told educators to report to picket lines on Tuesday even if a tentative agreement is struck.
Negotiations between the United Teachers of Los Angeles and the Los Angeles Unified School District stretched into the Martin Luther King Jr. holiday Monday as many teachers took a break from their labor action.
"We are making progress," the UTLA said in a statement posted on the union's website Monday.
Even if an tentative agreement is reached, teachers will not be going to back work immediately, the union said.
"Report to picket lines as usual in the morning on Tuesday," the statement said.
Details of the negotiations have not been released. Union and district officials have agreed to keep what happens at the bargaining table confidential while talks continue.
Tuesday will mark nine days since more than 30,000 public school teachers walked out of classrooms and hit picket lines for the first time in 30 years.
Union officials said that if a tentative agreement is reached, it must be ratified by teachers before they head back to the classroom.
"Our members voted 98% to authorize a strike, and when we end the strike it will also be up to our members to ratify any tentative agreement," the union said in its statement on Monday. "We continue to bargain for an agreement today and will keep you posted."
Representatives of the UTLA and the LAUSD resumed contract negotiations on Friday at the urging of Los Angeles Mayor Eric Garcetti, a potential 2020 candidate for U.S> president.
The teachers have asked for a 6.5 percent pay hike retroactive to July 1, 2016, smaller class sizes and for the district to add about 1,200 support staff positions, including nurses, librarians and counselors.
School district Superintendent Austin Beutner said last week that the district doesn't have the money to meet all of the union's demands.
But Beutner expressed optimism that both sides can reach a compromise and break the impasse.
Beutner added that in the first week of the strike the district lost about $125 million in state revenue payments based on student attendance.
Schools have remained open in the district with substitute teachers filling in, but only about a third of the nearly 600,000 students in the district have been attending classes. Many students and their parents have joined teachers on picket lines.
UTLA President Alex Caputo-Pearl has called the strike a "fight for the soul of public education" in Los Angeles.
The union has been attempting to get a new contract for two years with no success. Caputo-Pearl said another big sticking point in the negotiations is the union's objection to the proliferation of charter schools in the district.
About 1 in 5 Los Angeles public school students attend a charter school, the most of any school district in the nation. Charter schools are privately managed and most are nonunion.
"If we allow this movement to win, then our schools will be privatized, our students will have less equity and less access, and our jobs and our healthcare will be attacked," said Caputo-Pearl at a rally on Friday.