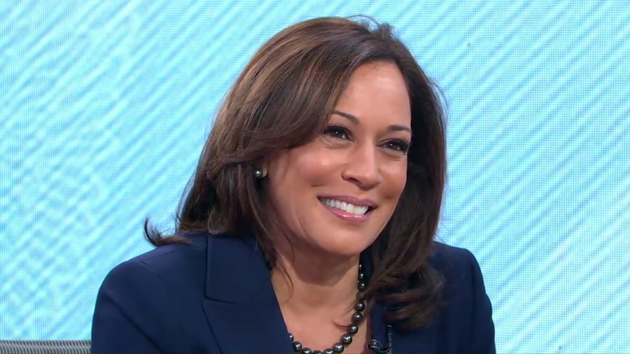 ABCNews.com(NEW YORK) — California Sen. Kamala Harris announced Monday on "Good Morning America" that she will be running for president in 2020, a move that could make her the first woman and woman of color to serve as U.S. president if elected.
Before Harris was elected in 2016 as the junior senator representing California, she was the state's attorney general for six years and San Francisco's district attorney for seven years. Born to an Indian mother and Jamaican father in Oakland, Harris "had a stroller-eye view of the Civil Rights movement," according to her official Senate bio.
Harris has been compared to former President Barack Obama for quickly rising through the ranks of the Democratic Party, and for having presidential ambitions after serving for just a short time in the Senate. Harris has previously said she feels the country is ready to make history by electing a woman of color as president.
"We need to give the American public more credit,” she said on 'GMA' when asked if the country was ready for a woman of color to be president. “We have so much more in common than what separates us."
Here’s what you need to know:
Name: Kamala Devi Harris
Age: 54
Birthplace: Oakland, California

What she used to do:
Served as the attorney general of California from 2011 to 2017. Served as the district attorney of San Francisco from 2004 to 2010. Prior to that Harris worked for San Francisco's City Attorney, Louise Renne, as the chief of the Community and Neighborhood Division and as the deputy district attorney in Alameda County. She attended Howard University and received her law degree from the University of California, Hastings.
Career as a prosecutor:
Beginning her career as the deputy district attorney in Alameda County, Harris specialized in prosecuting child sexual assault cases. She was the first African-American woman to be elected district attorney of San Francisco and started a program that gave first-time drug offenders an opportunity to earn a high-school diploma and offered them job opportunities.
Harris was also the first woman, first African-American and first Asian-American to serve as California's attorney general, and refers to herself as a "progressive prosecutor." However, Harris has recently received criticism for some of her stances as a prosecutor. Lara Bazelon, a University of San Francisco law professor, wrote in a New York Times op-ed last week that if Harris "wants people who care about dismantling mass incarceration and correcting miscarriages of justice to vote for her, she needs to radically break with her past."
While Harris personally opposes the death penalty, she promised to defend it as California's attorney general in 2014, and appealed a federal judge’s decision that it was unconstitutional. Harris also won a $25 billion settlement for California homeowners hit by the foreclosure crisis, but refused to prosecute Steven Mnuchin's OneWest Bank for foreclosure violations in 2013.
What she did as a senator:
Elected in 2016, Harris has quickly made a name for herself. She drew attention for her focused questioning during last year's Supreme Court confirmation hearings for now-Justice Brett Kavanaugh. A member of the Senate Judiciary Committee, Harris called Kavanaugh "unfit" to serve on the Supreme Court.
During an emotional exchange between Harris and Professor Christine Blasey Ford, Harris said she believed Ford and praised her courage for coming forward.
"You have passed a polygraph and submitted the results to this committee. Judge Kavanaugh has not. You have called for outside witnesses to testify and for expert witnesses to testify. Judge Kavanaugh has not. But most importantly, you have called for an independent FBI investigation into the facts. Judge Kavanaugh has not," Harris said.
A vocal critic of President Donald Trump, Harris called his border wall "a vanity project," and described the partial government shutdown — now the longest-running in U.S. history that has left about 800,000 federal workers without pay — "an emergency of his own creation."
Harris also recently announced the "LIFT Act," a tax proposal that aims to help U.S. families earning less than $100,000 a year to become eligible for a monthly tax credit of up to $500, or $6,000 a year.
What you might not know about her:
Harris is the daughter of an Indian mother and Jamaican father, and is the second African-American woman and first South Asian-American senator in history.
In Sanskrit, her name means "lotus."
She is the author of a newly-released memoir, "The Truths We Hold: An American Journey," and the children's book, "Superheroes Are Everywhere." Harris credits her late mother, Shyamala Gopalan Harris, with empowering her to look for solutions. "I was raised that, when you see a problem, you don't complain about it, you go and do something about it," Harris previously said in a "Good Morning America" interview.
Harris chose to announce her campaign on Martin Luther King Jr. Day, citing the civil rights leader as an inspiration that inspires her. Her campaign colors — yellow, red and blue — are a homage to the campaign of Shirley Chisholm, the first Black woman ever to run for president from a major party, and who launched her presidential bid 47 years ago this week, according to Harris' campaign.
In October, Harris took a two-day trip through Iowa for the first time in a decade to campaign for state-level Democratic candidates there. The last time Harris visited was in 2008 to campaign for then-Sen. Barack Obama.