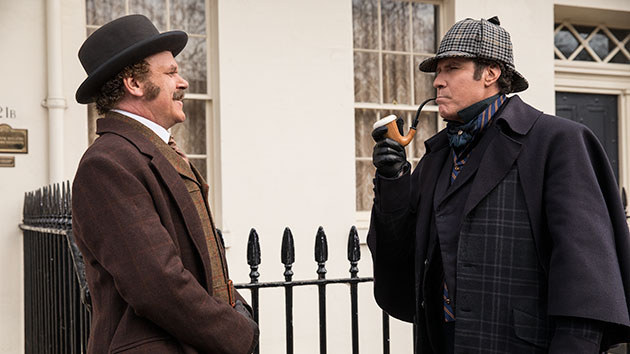 L-R: John C. Reilly and Will Ferrell in "Holmes & Watson"; Giles Keyte/© 2018 CTMG, Inc.(HOLLYWOOD) — The Oscar nominations come out tomorrow, which means today, it's the nominations for the Razzies.

The Razzies — or Golden Raspberry Awards, officially — celebrate the very worst in movies for the past year, and among the nominees is President Donald Trump.

The Leader of the Free World is nominated for Worst Actor for appearing as himself in two documentaries: Death of a Nation and Fahrenheit 11/9. His competition includes Will Ferrell for Holmes & Watson, John Travolta for Gotti, Bruce Willis for Death Wish and Johnny Depp's voiceover performance in Sherlock Gnomes.

He's also up for Worst Screen Combo for those two films, listed as "Donald J. Trump & His Self Perpetuating Pettiness." First Lady Melania Trump is nominated for Worst Supporting Actress for appearing as herself in Fahrenheit 11/19 — and so Kellyanne Conway.

Holmes & Watson, one of the biggest box-office flops in recent memory, is up for Worst Picture, along with Gotti, The Happytime Murders, Robin Hood and Winchester.

The 39th annual Razzie Awards will be handed out February 23, the night before the 91st Academy Awards.

Here are the rest of the nominees: