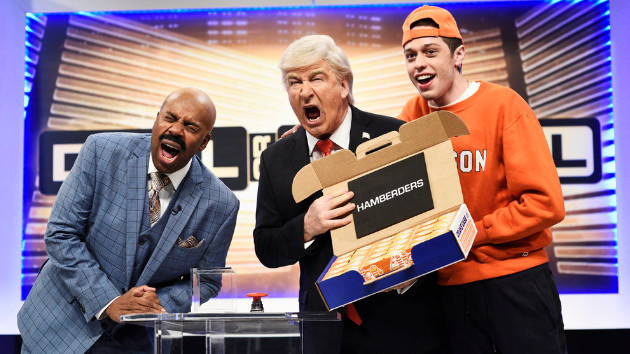 Will Heath/NBC(NEW YORK) — The first Saturday Night Live of the new year opened with President Donald Trump playing a game of Deal or No Deal — in a bid to end the longest government shutdown in history.

"We decided to do this in the only format you understand: a TV game show with women holding briefcases," said Kenan Thompson, playing host Steve Harvey — who explained that he was substituting for germaphobe regular host Howie Mandel, who supposedly shook someone's hand and got Ebola.

Rather than models, the women — and men — holding briefcases ended up being members of Congress, and instead of dollar amounts, their suitcases contained proposals to end the shutdown.

"This is like two grandparents fighting over the thermostat," Harvey said.

Harvey encouraged Trump to pick another briefcase and "remember, every time you say no deal a half a million federal employees don't get paid."

He quickly responded "no deal."

An impression of the newly seated Democrat Alexandria Ocasio-Cortez, played by Melissa Villaseñor, made its debut on SNL.

"Is that Cardi B?" Trump asked.

"Trump and the GOP are just afraid of me because I'm under 100 and know how to use Instagram," she responded.

In the end, Trump called on a Clemson player, who offered "hamberders," a reference to the president's Twitter typo, and Trump took the deal to end the shutdown.

"I haven't eaten a hamberders in almost 15 minutes, Steve, I'm gonna make that deal," he said.

The Clemson football player was played by Pete Davidson. It was Davidson's first appearance in a sketch since his suicide scare in December.