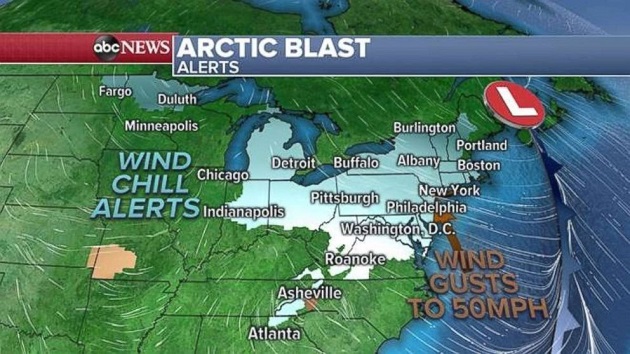 ABC News(NEW YORK) — After a winter storm brought up to 2 feet of snow to parts of the Midwest and Northeast this weekend, brutally cold temperatures swept through the eastern U.S. Monday.
Temperatures Monday morning were 30 to 40 degrees colder than just a day earlier in some areas. In Philadelphia, it was 48 degrees on Sunday morning and a biting 12 degrees on Monday.
Wind chills are expected to remain dangerously cold all day, and parts of the Northeast wind gusts could reach 50 mph.
Wind chills Monday morning fell to:

minus 17 F in New York City minus 14 F in Boston minus 19 F in Hartford , Connecticut minus 30 F in Albany, New York minus 10 F in Philadelphia

A new storm is forecast to take shape over the Great Plains Monday night and into Tuesday, heading east by Wednesday.
This new system is expected to spread snow in the northern Plains and parts of the upper Midwest. Omaha, Nebraska; Sioux Falls, South Dakota and Minneapolis should see some powder, some of which is likely to fall in Michigan and parts of the interior Northeast by Tuesday night and into Wednesday.
Along with the cold front, heavy rain is likely across the South, with a chance of a snow and rain mix in Tennessee and the Mississippi River Valley as temperatures drop.
Snowfalls of 4 to 6 inches are possible in parts of the Midwest through the middle of the week, from Nebraska to Wisconsin. This storm is expected to take mild air to the Interstate 95 corridor and deliver another shot of heavy rain — an inch or more — from Washington D.C. to New York.
After this storm, another cold wave awaits, along with a strong blast of cold air from Canada. The Midwest could see minus 40 wind chills by Friday.
A second round of bitter cold is expected to reach the East Coast by the weekend.