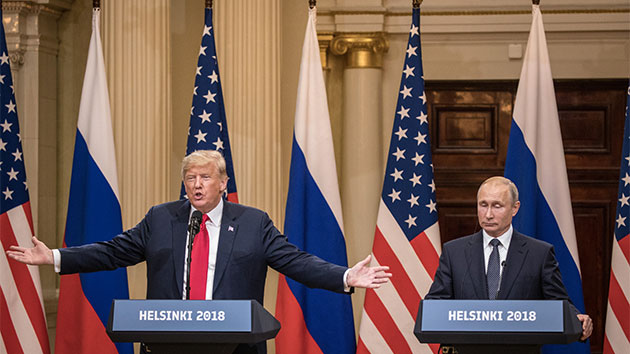 Chris McGrath/Getty Images(WASHINGTON) — Marina Gross, a State Department interpreter, was the only other American in the room during President Donald Trump's one-on-one meeting with Russian President Putin in Helsinki last summer.

ABC News has learned new details about the 64-year-old interpreter with the State Department's Office of Language Services who is at the center of the political storm over what she might know about the private conversations Trump held with Putin during their meeting in Helsinki last summer.

Neither Gross nor her close family members provided comment for this story when contacted by ABC News.

Veteran interpreters are concerned that a Congressional subpoena of Gross or her notes of the meeting would set a dangerous precedent. They also question whether her interpreting notes would contain actual contents of the meeting itself.

WHO IS MARINA GROSS?

Born in Russia, Gross was in her mid-20's when she and her family members immigrated to the United States in the late 1980s in the waning days of the Soviet Union.

In the 1990s Gross began interpreting for the State Department as a contract interpreter.

Well respected, she was later hired by the State Department and currently works as one of two Russian staff interpreters at the department’s Office of Language Services.

That office hires interpreters and translators who work throughout the U.S. government, including with the president.

Interpreters play a vital role in key international meetings where their language services are on full display, but by training, they remain in the shadows.

Accordingly, few pictures exist of Gross, other than those publicly released by the White House or the State Department where she was seen interpreting for first lady Laura Bush and former Secretary of State Rex Tillerson.

But it is Gross' work in Helsinki on July 16 that has sparked the interest of Congressional Democrats because she was the only other American in the room for Trump's two-hour long meeting with Putin and his own interpreter.

Trump has met with Putin five times, but only twice in formal one-on-one meetings held in Hamburg and Helsinki.

Tillerson sat in with both presidents during their Hamburg meeting and provided other national security officials and reporters with a brief readout of issues that were discussed, but the Washington Post reported that the U.S. government has no internal notes of that meeting and that Trump seized the notes taken by his interpreter.

Since then, Congressional Democrats have said they want to gain access to Gross' notes to understand what Trump may have spoken about with Putin. A previous effort last year by Democrats to subpoena Gross and the interpreter at Trump's Hamburg meeting were shelved by Republicans who were in control the House of Representatives.

Last week Michael McFaul, the former U.S. ambassador tweeted his support of Gross describing her as "a fantastic interpreter" and "a terrific person to boot!"

Professional interpreters are concerned about the dangerous precedent that would be set by Congress if a diplomatic interpreter is subpoenaed.

"I've never heard of that happening in the 30 years that I worked the State Department or subsequently since I retired," said Dimitry Zarechnak a former interpreter with the State Department's Office of Language Services, who interpreted for President Ronald Reagan during some of his summits with Mikhail Gorbachev, the last leader of the Soviet Union.

"I think it would just be a very bad move and bad precedent for diplomacy in general," he told ABC News.

Harry Obst, the former director of the Office of Language Services who interpreted for seven American presidents, said that if he was placed in a similar situation, "I would not divulge any information."

"That's because of the oath that you swear to not divulge any classified information on any level," he said. "Because you have a top secret clearance."

A greater concern is the impact a subpoena could have on state leaders excluding interpreters from their meeting if they believe they could be subpoenaed by Congress in the future.

"The whole idea of subpoenaing an interpreter is atrocious," said Zarechnak. "What foreign leader would want to meet with the U.S. leader thinking that 'well, the interpreter could be subpoenaed and tell Congress what the meeting was about.'"

And a subpoena could also lead a U.S. interpreter to not rely on American interpreters.

"The president would also have a great incentive not to use our interpreter if there was a danger that that interpreter would then be subpoenaed in Congress," said Zarechnak.

Zarechnak noted that was something President Richard Nixon practiced during his his one-on-one meetings with Soviet leaders in the 1970s.

"Unfortunately President Nixon and [former Secretary of State Henry] Kissinger specifically did not use our interpreters," said Zarechnak. "I guess for the sake of their secrecy" they relied only on the Soviet interpreters during their meetings.

WOULD GROSS' NOTES BE OF ANY VALUE?

Both veteran interpreters question whether Gross' notes would be of much historical value.

Even if investigators successfully gained access to Gross' notes "they wouldn't know what to do with them in the first place" said Obst.

That's because as a matter of course the notes taken by professional interpreters are less about taking verbatim quotes than they are about getting the right inflection or meaning of a word or sentence.

Interpreters use symbols or meanings for words or proper context that are only comprehensible to them at that specific moment in time.

What might be more useful are the official classified documents, known as "memorandums of conversation" or MemCon's, that are compiled by interpreters using their handwritten notes.

MemCon's are ultimately only accessible by the Secretary of State and Obst said often times an interpreter will destroy the handwritten notes used during a meeting because they are no longer as relevant as the classified official document.

"So really what is saved is the memo not the notes themselves," said Obst.

Zarechnak recalls how the MemCon he wrote from his notes of the consecutive translation he took during the one-on-one meetings during the 1985 Reagan-Gorbachev summit in Geneva were declassified 15 years later.

That declassified MemCon captures a detailed flavor of the topics that were discussed during one meeting as well as Zarechnak's take about Gorbachev's.

During a lengthy exchange on human rights in the Soviet Union, "Gorbachev interrupted, without listening to the translation, to say that he had understood what the President had said, and that he took all of this into account. He was familiar with the American political process, and the President should not hide behind this."

Zarechnak then added his take on Gorbachev's interruption and what it might mean about Gorbachev's knowledge of English.

Since MemCons are classified, the access to details of the Helsinki meeting that congressional Democrats want, may ultimately rest with Trump.

Obst told ABC News that only a president can release an interpreter from disclosing classified information gathered during a private meeting.