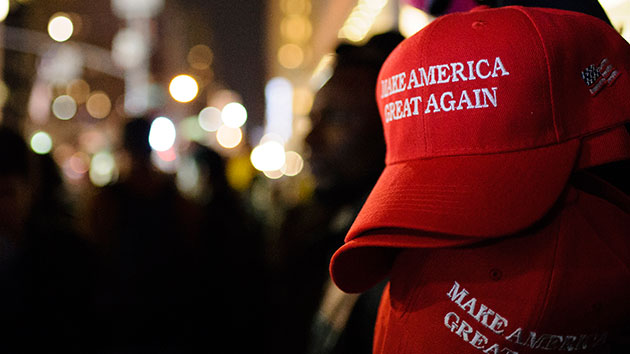 David Cliff/SOPA Images/LightRocket/Getty Images(WASHINGTON) — Outrage was growing across the political spectrum over the weekend after dozens of teens from an all-male Catholic school in Kentucky — some wearing bright-red "Make America Great Again" baseball caps — appeared to mock and chant over the voices of a small group of Native Americans who were singing on the steps of the Lincoln Memorial at the conclusion of a march in Washington, D.C.
Friday’s inaugural Indigenous Peoples March coincided with the annual March for Life, and it appears that at least some of the students had come from that anti-abortion march.
The most jarring of several viral videos of the incident pinballing through cyberspace shows a young man in a red "MAGA" hat who stands motionless and smirking for more than three minutes, with his face inches from that of Native American leader and Vietnam veteran Nathan Phillips — who is rhythmically banging a drum and singing along with a handful of fellow Native Americans.
Phillips remains outwardly placid and composed throughout the viscerally distressing confrontation, according to video shot inches from the other side of Philips’ face and posted online. Another video showed Phillips appear to approach the group of students before the stare-down.

In an interview on Friday after the incident that was posted to Instagram, Phillips said he wished the throng of teens would put their energy into helping feed the poor.
"I heard them say, 'Build that wall, build that wall,' you know?" he said in the interview. "This is indigenous lands, you know. We’re not supposed to have walls here. We never did. Before anybody else came here, we never had walls. We never had a prison."
"We always took care of our elders, took care of our children," Phillips continued. "We always provided for them, you know? We taught them right from wrong. I wish I could see that energy of the young men to, you know, put that energy to make this country really great. Helping those that are hungry."
In a separate interview with the Washington Post, Phillips said the dozens of teens began to swarm around his group as they concluded their march and were getting ready to leave.
“It was getting ugly," he told the newspaper.
“I started going that way, and that guy in the hat stood in my way and we were at an impasse. He just blocked my way and wouldn’t allow me to retreat.”
Fury over the incident began to boil over on Saturday as the videos began to spread more and more widely.
"This Veteran put his life on the line for our country. The students' display of blatant hate, disrespect, and intolerance is a signal of how common decency has decayed under this administration," Congresswoman Deb Haaland, D-New Mexico, tweeted at about 11:30 a.m. "Heartbreaking."
Then, in a blistering statement posted to her verified Facebook account shortly after 3 p.m., Kentucky Secretary of State Alison Lundergan Grimes called the viral videos “horrific.”
“In spite of these horrific scenes, I refuse to shame and solely blame these children for this type of behavior. Instead, I turn to the adults and administration that are charged with teaching them, and to those who are silently letting others promote this behavior."
Less than an hour later, the diocese of Covington and the Covington Catholic School issued a joint statement.
“We condemn the actions of the Covington Catholic High School students towards Nathan Phillips specifically, and Native Americans in general. … We extend our deepest apologies to Mr. Phillips. This behavior is opposed to the Church’s teachings on the dignity and respect of the human person. The matter is being investigated and we will take appropriate action, up to and including expulsion.”
Attempts to reach an official at Covington Catholic High School on Saturday evening were not immediately successful. None of the students in the video were immediately identifiable and so could not be reached for comment.
Meanwhile, Twitter lit up over the incident, with many conservative voices condemning the hostility on display among the teens.
“The contrast between the calm dignity and quiet strength of Mr. Phillips and the behavior of the #MAGA brats who have absorbed the spirit of Trumpism — this spectacle is a lesson which all Americans can learn,” conservative commentator Bill Kristol, a critic of the president, said in a tweet.
Earlier this week, Native Americans leaders called on Trump to apologize for invoking the Wounded Knee Massacre and the Battle of Little Bighorn in the course of mocking Sen. Elizabeth Warren, whom he often refers to derisively as “Pocahontas,” in a tweet.
Trump made fun of an Instagram video Warren released on New Year's Eve in which she drank a beer on camera. He tweeted, “If Elizabeth Warren, often referred to by me as Pocahontas, did this commercial from Bighorn or Wounded Knee instead of her kitchen, with her husband dressed in full Indian garb, it would have been a smash!”
Copyright © 2019, ABC Radio. All rights reserved.