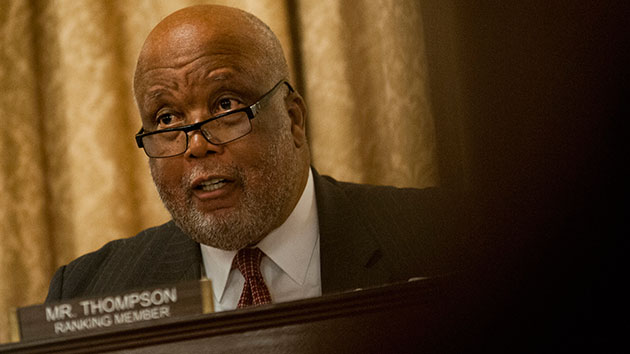 Gabriella Demczuk/Getty Images(WASHINGTON) — The Democratic chairman of the House Homeland Security Committee said he “would not rule out a wall in certain instances” after President Donald Trump proposed a new immigration and border security plan Saturday in an attempt to end the partial government shutdown.
Asked if he would “rule out a wall,” Rep. Bennie Thompson of Mississippi said, “I would not rule out a wall in certain instances."
“The notion that we can't have barriers is just something that's not true," he said, adding, "You have to have a plan, and the plan that the president initially started with is not where he is now. And so we don't know where he will be tomorrow, but clearly, Democrats are for border security, but we're not for this constantly moving the ball just for a talking point.”
On Saturday, in an address from the White House, Trump proposed an immigration and border security plan in an effort to end the shutdown and “solve the crisis on the southern border.”
The plan has many components, but at the crux of it, Trump wants $5.7 billion to build an additional 230 miles of a see-through steel barrier system — “or a wall.”
“This is not a 2,000-mile concrete structure from sea to sea. These are steel barriers in high-priority locations,” Trump said.
On This Week, Thompson told Co-anchor Martha Raddatz, “I don’t think Democrats are opposed to any physical barriers. It's just the president constantly evolves his description of the wall, just as he indicated Mexico was going to pay for whatever was there.”
In an effort to entice Democrats to support the deal, he also proposed extending protections from deportation for three years for 700,000 so-called “Dreamers,” children brought to the U.S. illegally by their parents who were given a protected status under former President Barack Obama’s Deferred Action for Childhood Arrivals (DACA) executive order, and for Temporary Protected Status recipients whose status is currently facing expiration.
Copyright © 2019, ABC Radio. All rights reserved.