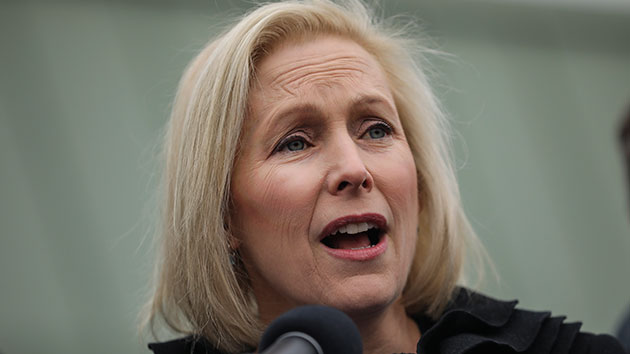 Drew Angerer/Getty Images(WASHINGTON) — New York Sen. Kirsten Gillibrand, the latest Democrat eyeing a 2020 bid for the White House, said Democrats would be “willing to talk about” a pathway to citizenship for the so-called “Dreamers,” which is further than what’s offered in President Donald Trump’s latest immigration and border security proposal to end the longest government shutdown in U.S. history.
On Sunday, Trump tweeted about his proposal, saying that “amnesty is not part of” the offer.
“Does that sound to you like he's moving a bit, and what's your reaction to that?” asked This Week Co-anchor Martha Raddatz.
“It doesn't sound like he's moving at all,” Gillibrand said. “If he really wants to work on comprehensive immigration reform, open the government and then sit down with Democratic leaders to actually work on the stuff that needs to get done. People need a pathway to citizenship, and we have 3 million Dreamers in this country and we should be protecting these young people. They came here through no fault of their own, and they've made lives.
“Why wouldn't you welcome them here to make sure they can have a pathway to citizenship? That's something we're willing to talk about, but for President Trump to hold hostage public servants, it's wrong. It's morally wrong.”
Copyright © 2019, ABC Radio. All rights reserved.

Democrats push for party unity as GOP unites to block voting rights bill
After meeting with vice president, Texas Democrats concede federal voting rights battle is in Senate
Biden to use summit to talk directly, clearly with Putin about differences: Blinken
Trump’s Justice Department seized data of House Democrats from Apple: Sources
Carrie Ann Inaba says she will return to ‘The Talk’ “when the time is right”
Blowout in New Mexico special election a hopeful sign for Democrats