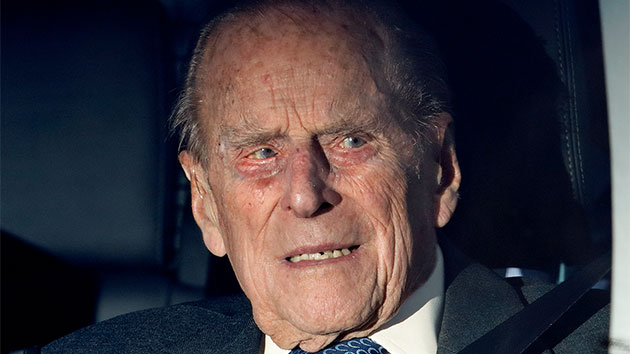 Max Mumby/Indigo/Getty Images(LONDON) — The Duke of Edinburgh and his driving are back in the British headlines again. Several Sunday papers have splashed photographs of the Queen's 97 year old husband back behind the wheel of a brand-new Land Rover.

The photos appeared just two days after he was part of a car crash involving two women and a 9-month-old baby near the royal Sandringham estate in Norfolk. Both of the women involved in the crash, who suffered minor injuries, as well as the Duke of Edinburgh were treated at a nearby hospital in East Anglia. The women were discharged the same day, and Prince Philip was seen for a check-up on Friday, though no injuries were reported.

Prince Philip was photographed near the Queen’s Sandringham estate again on Saturday, appearing to not only be driving alone on a public road, but also driving without a seat belt — an offense punishable by fine in the U.K.

Regional Norfolk police confirmed to ABC News that they had been in contact with the Duke of Edinburgh.

“We are aware of the photographs. Suitable words have been given to the driver in line with our standard response when being made aware of or receiving such images showing this type of offence,” the police said in a statement.

Meanwhile, one of the female passengers injured in the accident, Emma Fairweather, told the Sunday Mirror that she was unhappy with the royal palace’s response to the incident.

She said she had been told to expect contact from Buckingham Palace, and was hoping that meant a phone call from the Queen.

“Instead I got a call from a police family liaison officer. The message he passed on didn’t even make sense. He said ‘The Queen and Prince Philip would like to be remembered to you,’” Fairweather said.

“I love the royals but I’ve been ignored and rejected and I’m in a lot of pain,” Fairweather added. “It would mean the world to me if Prince Philip said sorry but I have no idea if he’s sorry at all.”

In response to the story, a Buckingham Palace spokesperson told ABC News that a “full message of support was sent to both the driver and the passenger.”

The palace declined to comment on the Duke of Edinburgh’s contact with the police for not wearing a seat belt.

Since Thursday’s accident questions have been raised as to whether the 97-year-old prince should continue to be driving himself on public roads.

Robert Jobson, royal correspondent with the UK's Evening Standard newspaper explained to ABC News that the prince has a fiercely independent nature. "You can understand to a degree why he wants to just be on his own to have the freedom and independence that offers him," he said.

A palace source confirmed to ABC News on Saturday that the Duke had sat and passed a police eyesight test after his accident. The police investigation into the incident is ongoing.